The story of the revered 15th century Malay warrior Hang Tuah and his four sworn brothers is made into a film by the Shaw Brothers, directed by a seasoned filmmaker from India (Phani Majumdar); based on an English book The Adventures of Hang Tuah by an Irish-born colonial civil servant (Mubin Sheppard) which in turn was freely adapted from Sejarah Melayu (The Malay Annals) and Hikayat Hang Tuah; and starred the popular, versatile actor-composer-director P. Ramlee (he wrote the music in the film too). Hang Tuah the movie was also rendered in ‘Eastman’ colour, which was very rare in the era of classic Malay films then. It must have been perceived to be a significant milestone in the film studio’s output, which more or less coincided with the growing nationalistic movement and the impending declaration of independence of Malaya from the British on 31 August 1957. (Then-Chief Minister Tunku Abdul Rahman was to sign the Independence agreement with Secretary of State for the Colonies Alan Lennox-Boyd in February 1956, after the film’s release in January 1956.) Hang Tuah, after all, is deemed to be a strong and fitting symbol of Malay(an) culture and values, and most exemplary of a loyal subject to the all-powerful Sultan (in other words, a dutiful citizen of the new post-colonial, constitutional monarchy).

The idea to adapt Hang Tuah’s story for a film had already been in gestation before the Shaw Brothers studio came to it. In November 1953, Mubin Sheppard had written to the Straits Times lamenting about a Malay film company seeking material for a film on the subject of ‘The Romances of Hang Tuah’, which he felt was less pertinent than a film that accurately tells the story of Hang Tuah. He made a plea to produce a long-overdue movie that “follows closely the life and adventures recorded in the Malay Annals and Hikayat Hang Tuah, so as to preserve the fair name and noble reputation of this Malay hero from the fate which has befallen so many other historic characters when they have been introduced to the public through the medium of film.”

Ja’afar Wiryo, who had acted in several Malay films by the Shaw Brothers’ Malay Film Productions studio (Aloha, Rachun Dunia, Sejoli), was reported in the Straits Times (11 April 1954) to be in on location in Malacca as a film director of the Garuda Film Corporation Ltd. He was recording historical scenes and background for a film on Hang Tuah, to be made predominantly in Indonesia, with Indonesian film stars in title roles. The newspaper article also mentioned Zubir Said – the composer of Singapore’s national anthem and many songs/music in classic Malay films – had written six musical numbers especially for the Hang Tuah film. We couldn’t confirm if this 1954 film by Ja’afar Wiryo was ever completed, or if any prints of it still exist. That’s for us, and any film historian reading this to find out.

The 1956 Hang Tuah, a period drama film set in 15th century Malacca (Melaka), was shot predominantly in the Jalan Ampas film studios in Singapore. The film crew also completed a few outdoor scenes in the rural parts of Singapore, the most notable of all a pirate-busting scene shot on Pulau Sekudu (Frog Island), just off Chek Jawa on Pulau Ubin, in the northeast reaches of Singapore. This particular scene is of a young, courageous Hang Tuah leading his friends to a rocky islet, off the coast from where their kampong is. They are to ambush a gang of pirates who often used the islet as a staging point to conduct raids on the fishing villages in the vicinity. 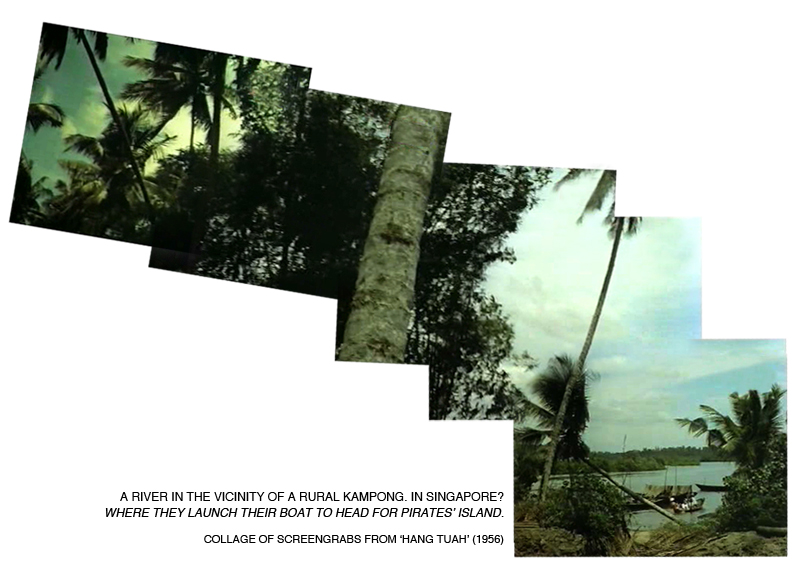 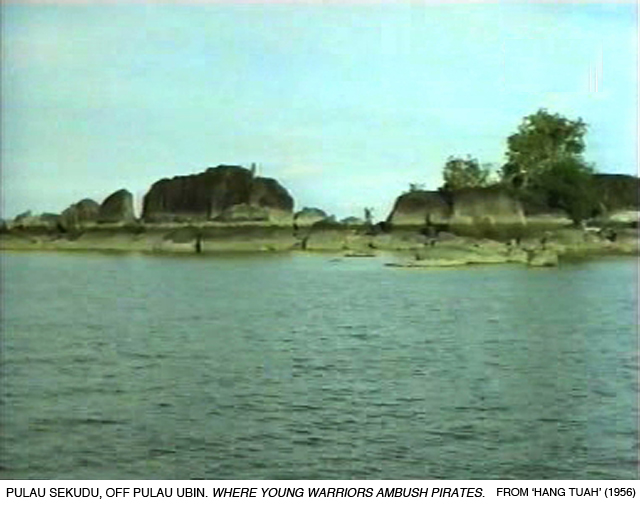 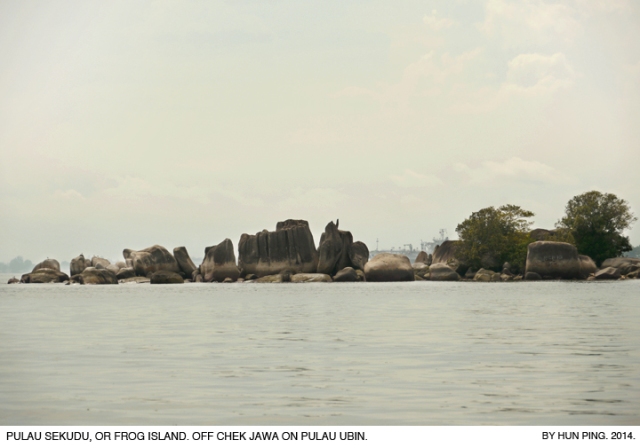 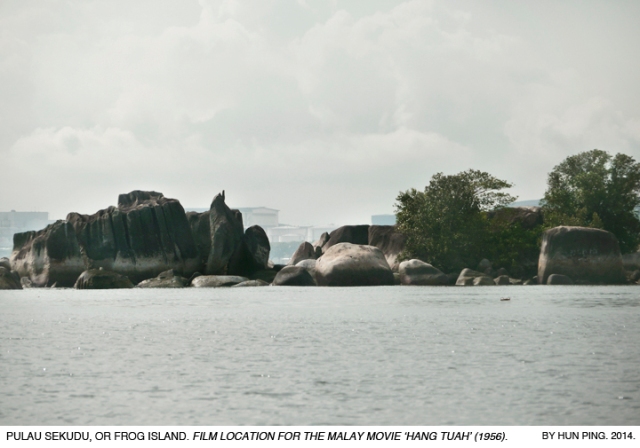 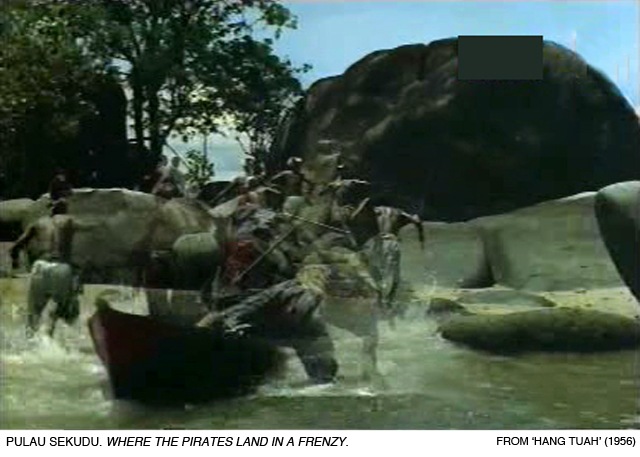 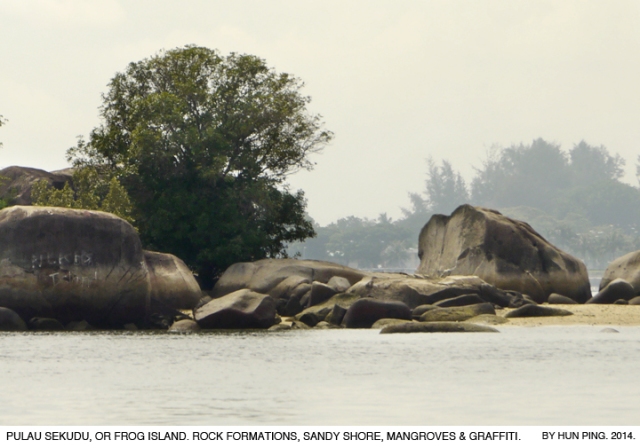 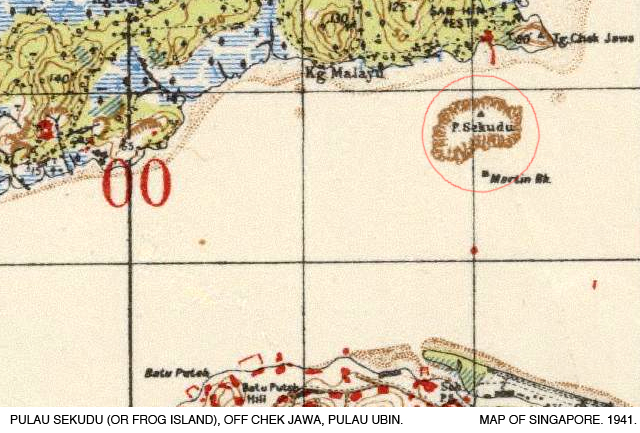 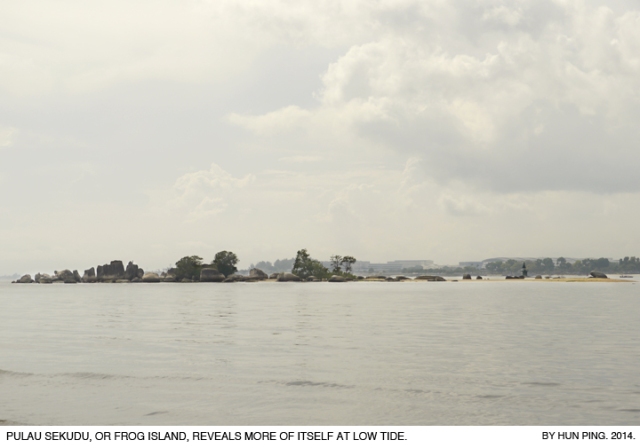 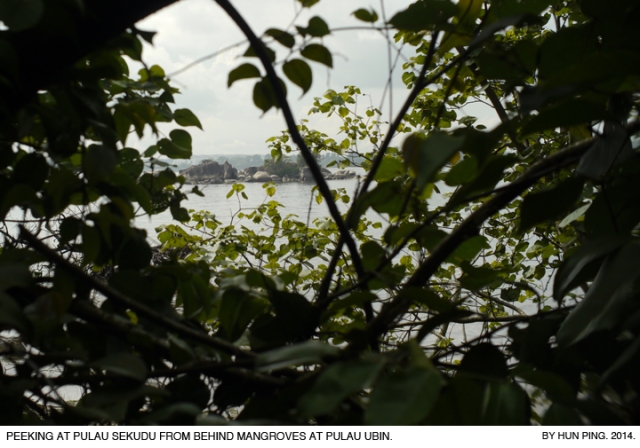 The name of the island, Frog Island, is derived from a local legend about three animals, a frog, a pig and an elephant, which raced each other across the Johor (Tebrau) Straits. They didn’t make it to the opposite shore, and ended up as islands in the straits, with the pig and elephant becoming Pulau Ubin (actually made up of two islands, strictly speaking), and the frog transforming into Pulau Sekudu. The island is extremely tiny (merely 3.2 hectares) when compared to its neighbour Pulau Ubin (1019.2 hectares), but holds many riches in terms of marine wild life. Nature enthusiasts make “pilgrimages” to the island during low spring tides to check and make records of the abundant variety of sea creatures (the sea stars, sponges, anemones, corals) living on its intertidal shores. Its relative inaccessibility has made it rather untouched by human intervention, and its amazing rock formations stay more or less the same over the years, barring weathering and erosion over time. (Compare the rock formations in the film from 1956 against our photos taken in November 2014. The distinctive ‘curved spike’ on the top of a rock mould is still there after almost sixty years). 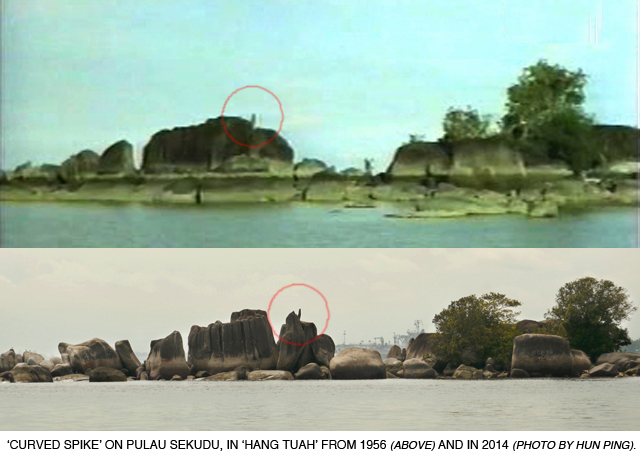