Leading Cantonese film and theatre actress Tsi Lo-lin 紫罗莲 – one of the founders of Hong Kong’s Union Film Company 中联影业公司 which advocated the production of meaningful socio-realist Cantonese drama films – first visited Malaya and Singapore in 1950-51 during a theatrical tour. She was impressed by how overseas Chinese in British-controlled Malaya had established institutions within the community for mutual self-help assistance and for the promotion of (Chinese) education for the masses. She noted how the Chinese in Malaya had fervently contributed to charitable causes, built schools and made education affordable or free for all.

Tsi Lo-lin felt compelled to faithfully represent on film the life of the overseas Chinese ‘华侨’ in Malaya, and made that the subject of the inaugural project of her new set-up, the Tsi Lo Lin Film Company 紫罗莲影片公司. The resulting film, Malaya Love Afffair 马来亚之恋 was financed, written and directed by Tsi Lo-lin, and it broadly focused on the themes of education, assimilation (of Chinese immigrants in Malaya), romance, kinship and traditional values.

The film was partially shot in Singapore, and features numerous street scenes and notable landmarks in the colony. It opens with an intriguing sequence of how Chinese immigrants would have arrived at Singapore by sea in the 1950s. Leung Yuk-kit, a fresh Chinese immigrant in Singapore to look for her long-lost father, alights an ocean liner (the Royal Interocean Lines ‘Tjitjalengka’) anchored off the Singapore Harbour, and transfers to a ‘lighter’ which takes her and her escort to a landing point next to the Clifford Pier. As the boat approaches the pier, Leung has a full view of what was then the ‘Singapore Bund’, a charming stretch of colonial buildings with exquisite architecture that used to line the waterfront. (They were demolished in the 1970s to ‘80s to be replaced by modern skyscrapers.) 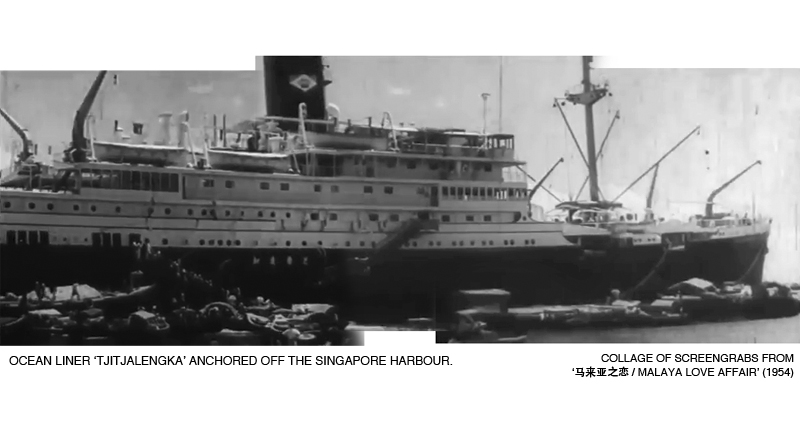 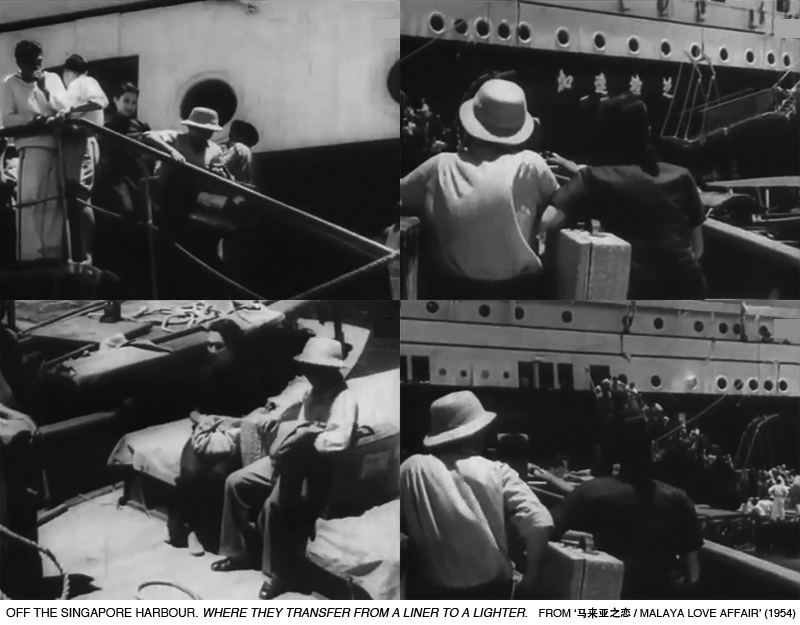 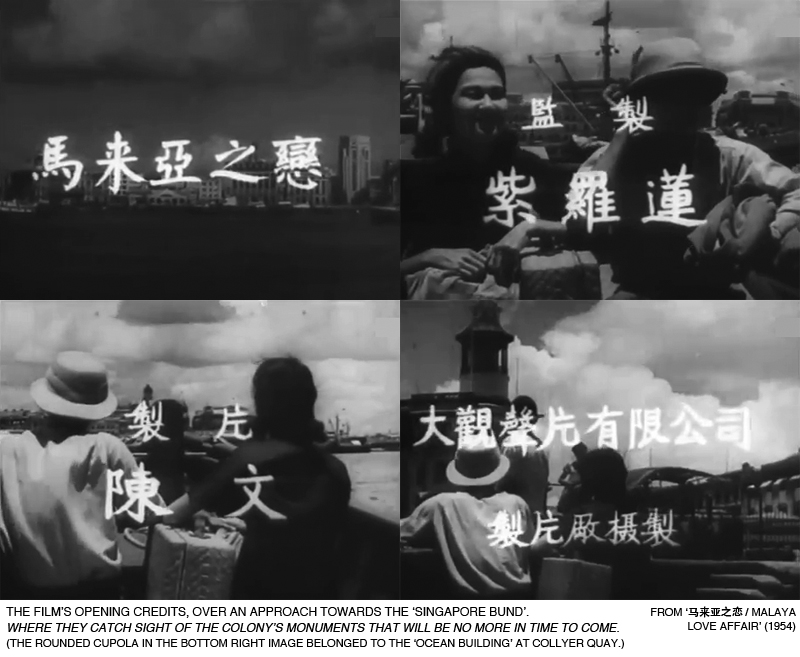 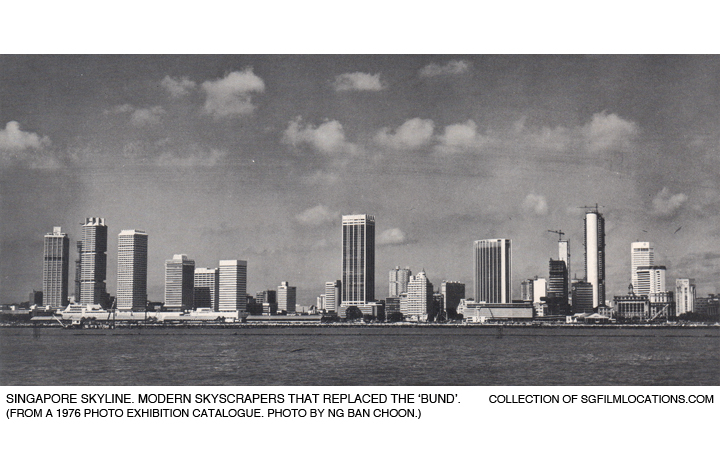 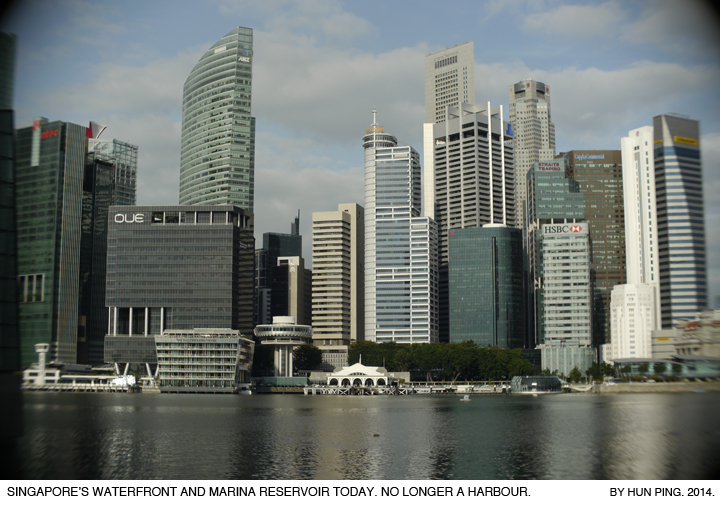 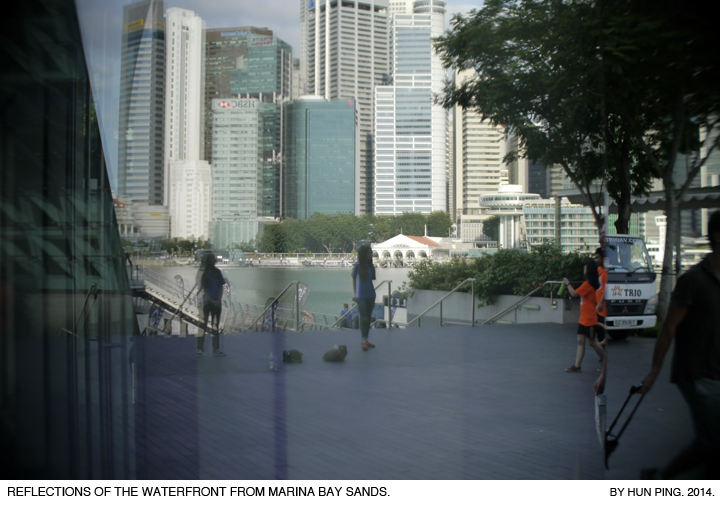 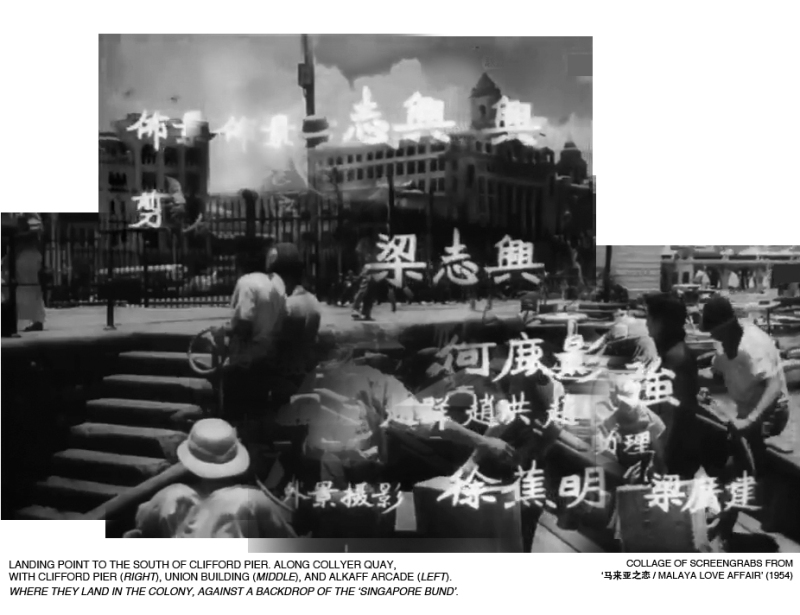 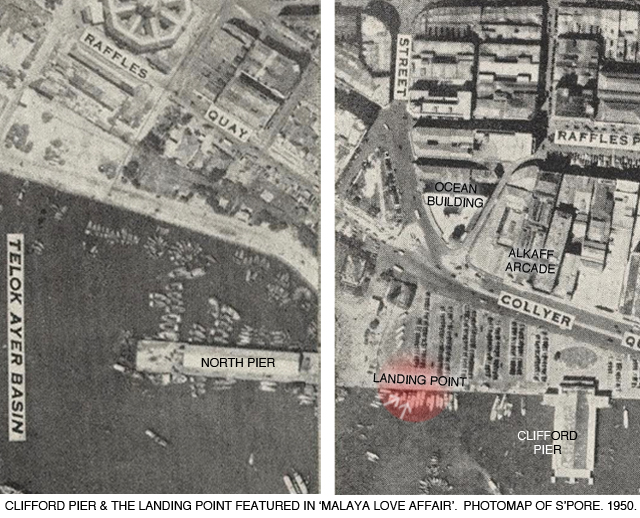 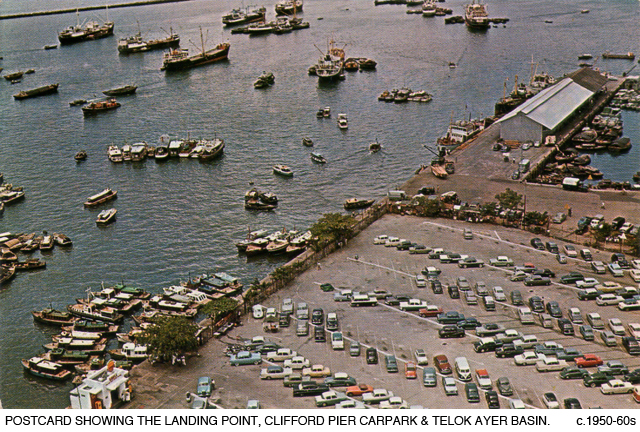 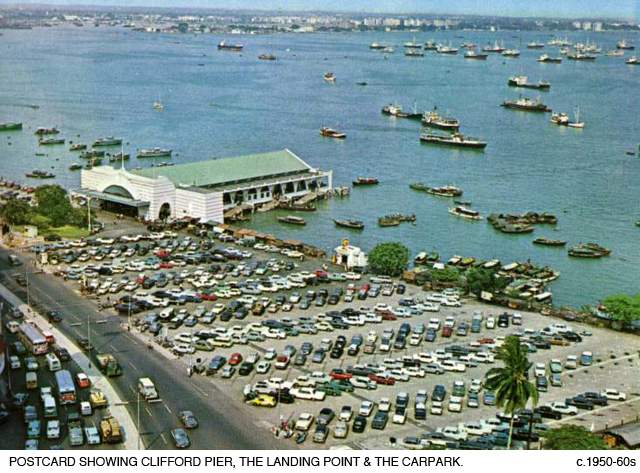 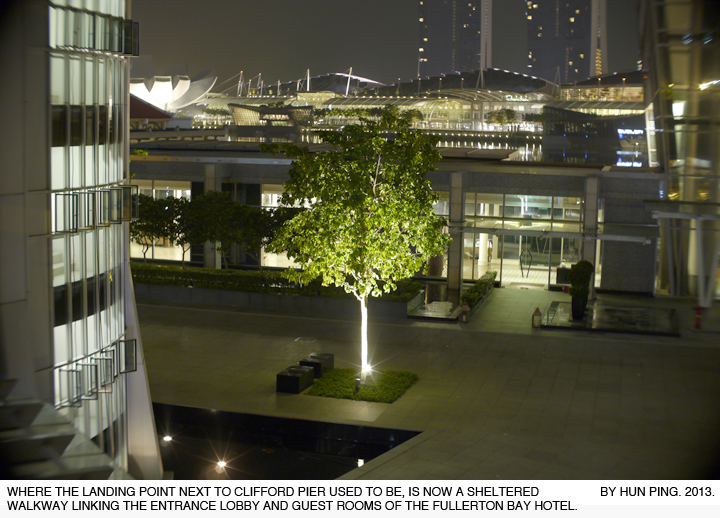 A trishaw picks the pair up along Collyer Quay and takes them on a quick tour of the city (seemingly catered for Hong Kong film audiences), passing Tanjong Pagar Railway Station, Anderson Bridge, Empress Place, South Bridge Road (the ‘Greater Town’ or ‘大坡’) and the famous Chinese shophouse bookstores (大众书局,黑猫图书公司) at North Bridge Road (the ‘Smaller Town’ or ‘小坡’). She arrives at a typical Anglo-Malay style bungalow elevated on piers, where she thought her father lived. However, a resident tells her that her father had failed in his business and relocated to the ‘working class’ shophouse district around ‘Beancurd Street’ (Upper Chin Chew Street). Then, a trip to ‘Beancurd Street’ reveals that her father had moved again to Kuala Lumpur, much to Leung’s disappointment. 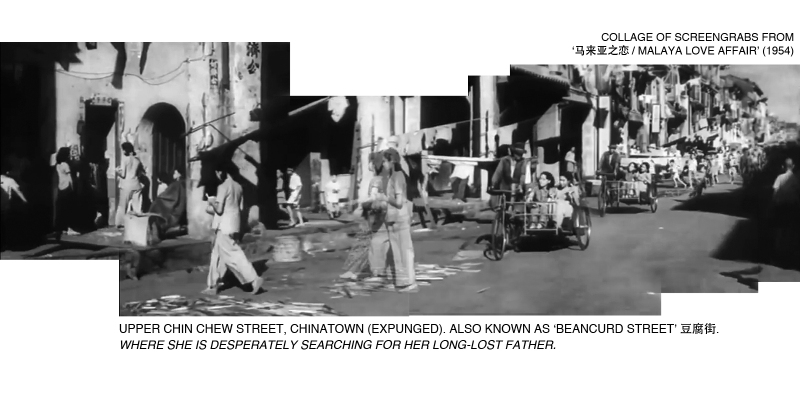 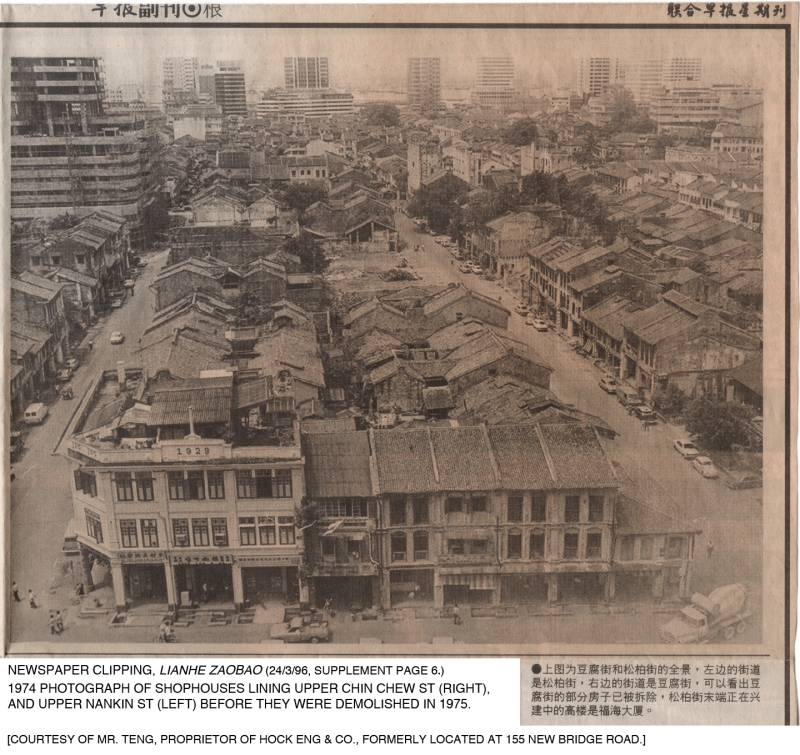 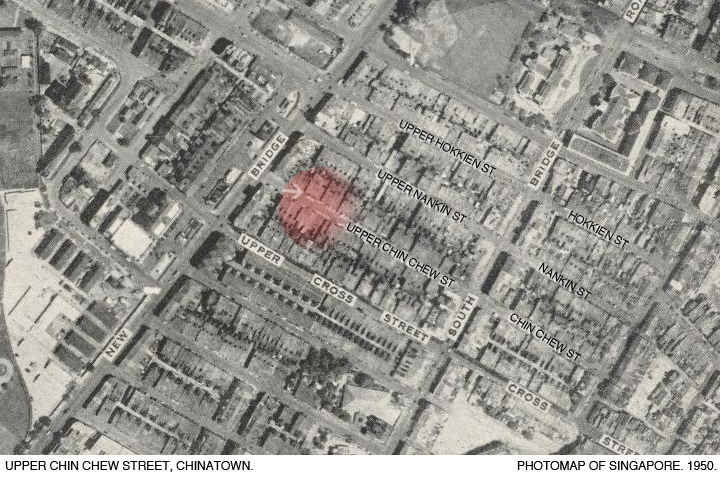 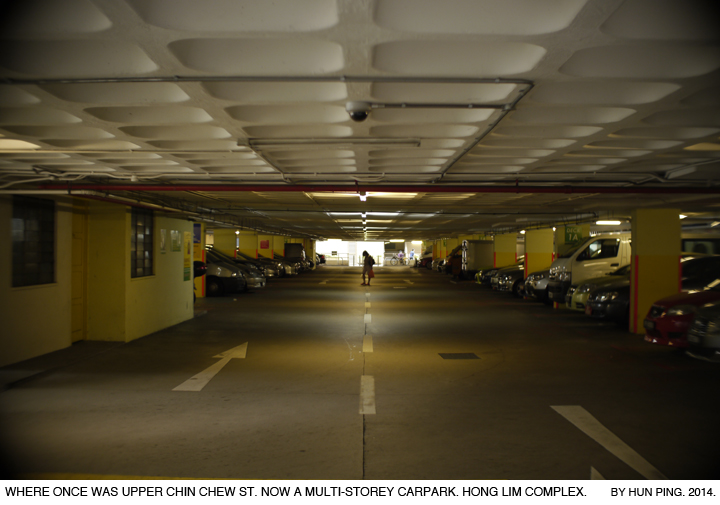 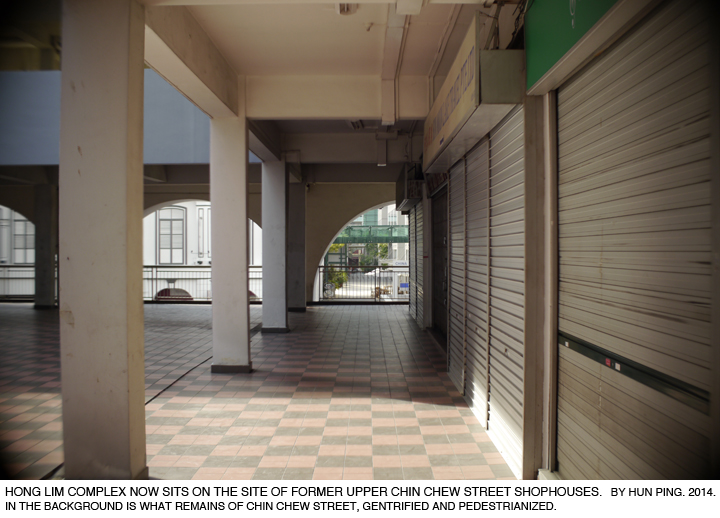 While searching for her father in Kuala Lumpur, Leung meets and falls in love with Wong Dai-wai, a hardworking principal of a local Chinese free school. Later, Leung reunites with her father after all, and she moves back to Singapore with him. In Singapore, she is granted her wish of completing her high-school education, and enrolled herself in Nan Hwa Girls’ School at Mount Sophia. It is at this juncture in the film where we get an amazing glimpse of student life in Nan Hwa of the 1950s (somewhat fictionalized, nonetheless). Particular sequences from the film, shot on location at the Adis School school compound, feature the façade of the school building, its classrooms and furniture, with actual students attending classes (including an embroidery class), boarding the school buses for home, and playing games at the school’s basketball court.

Nan Hwa Girls’ School was founded in 1917 by a group of Cantonese overseas Chinese philanthropists. The Adis Road school building dates from 1941 (the school had earlier occupied premises in Coleman Street and Bencoolen Street). During World War Two, the building was occupied by the Japanese military police and was even used as a brothel. After the war, Nan Hwa resumed operations in it until 1982, when the secondary school moved again, this time to Clementi New Town. The building last functioned as a student hostel and it is now conserved to be part of a new luxury residential project, as planned by the Urban Redevelopment Authority. (Public access to the former Nan Hwa school building looks likely to be restricted in the future.) 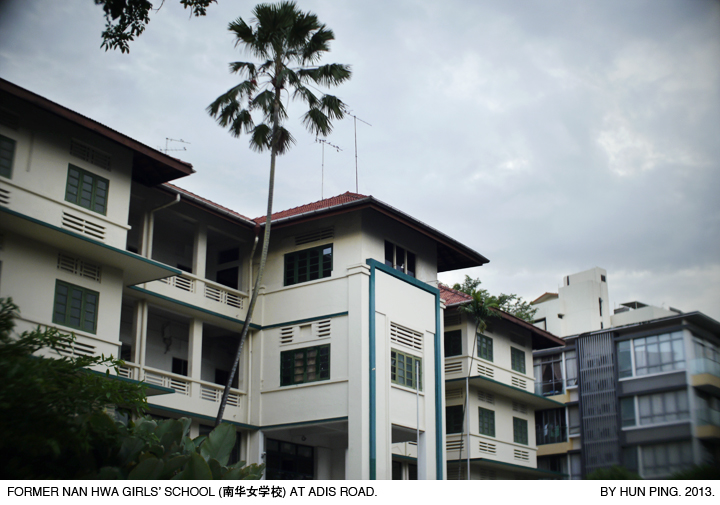 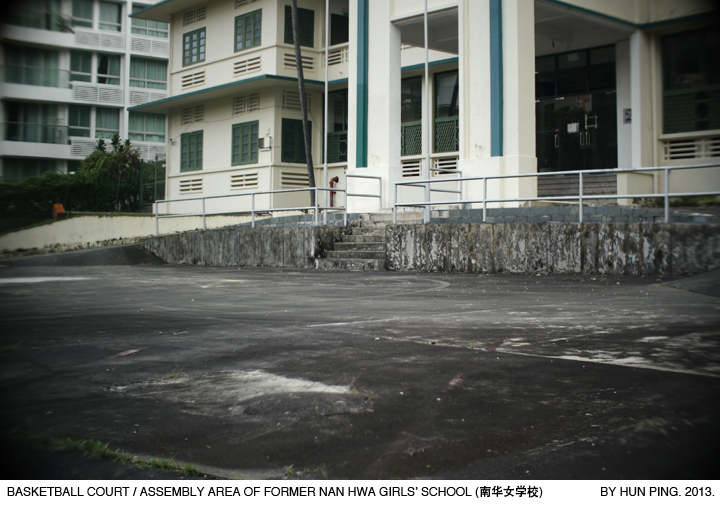 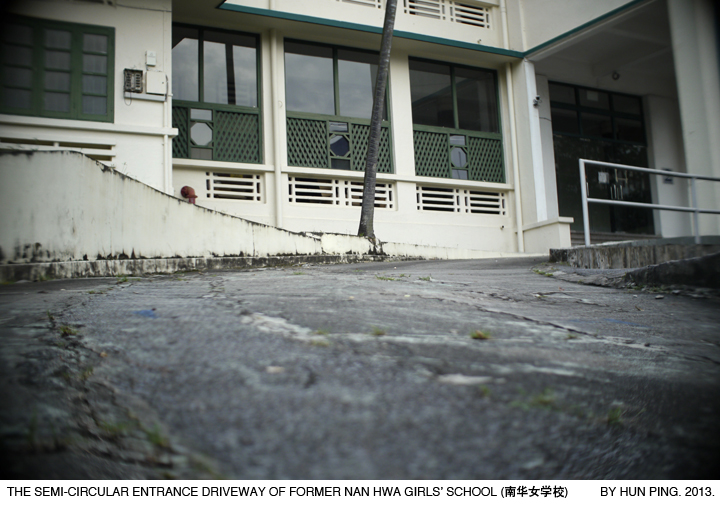 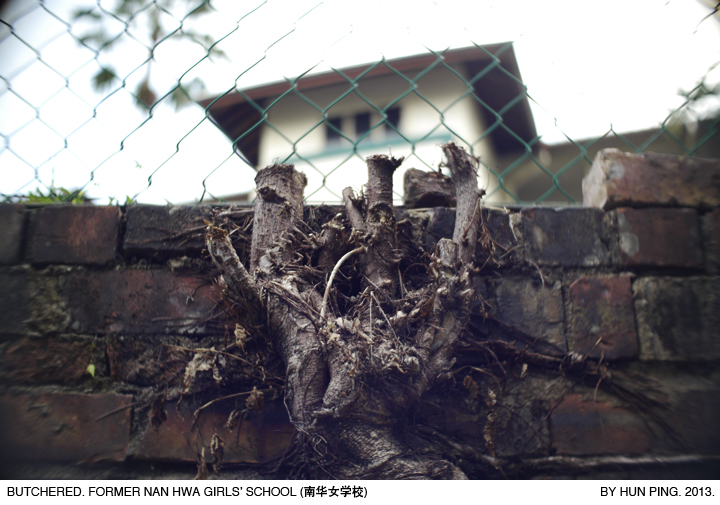 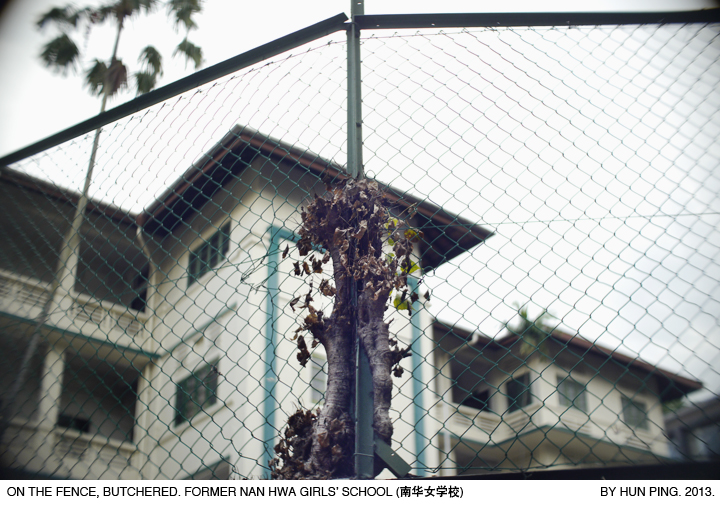 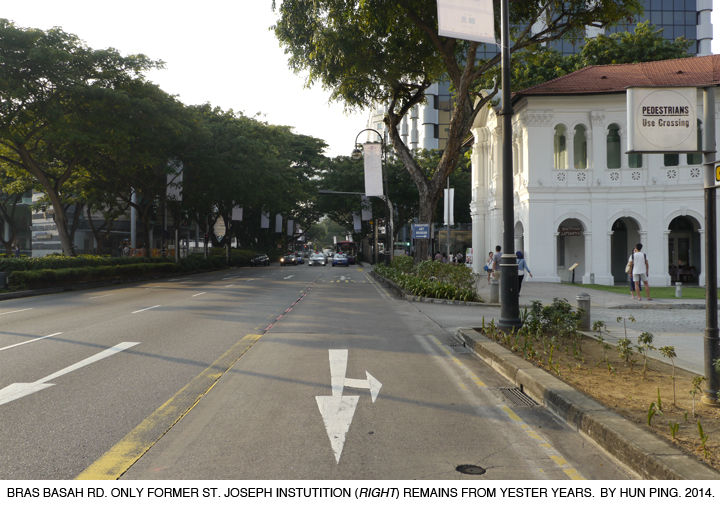 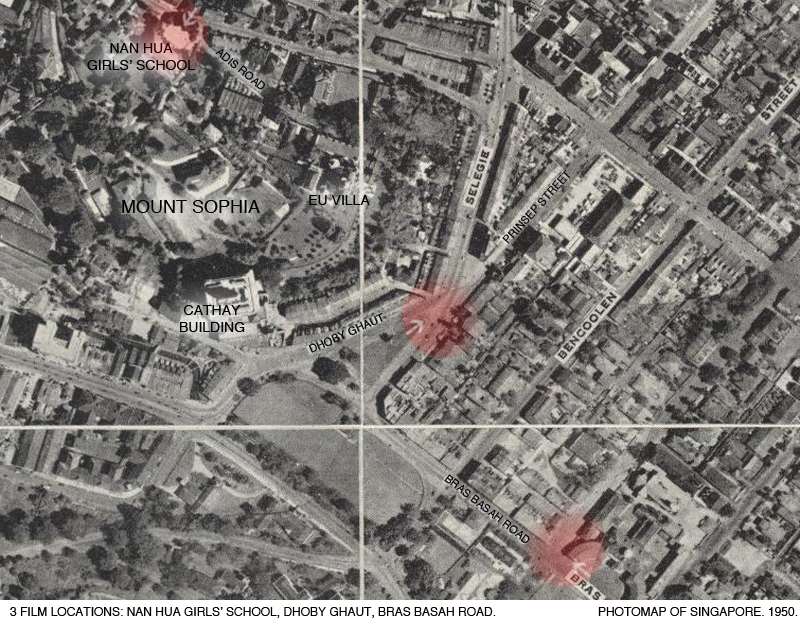 Towards the film’s end, Leung runs away from her family to be with Wong, but is devastated when she finds out that Wong’s missing wife and son had reunited with him in Kuala Lumpur. Back in Singapore, she roams about the Singapore River and Cavenagh Bridge, not daring to return home. (Interestingly, we notice that a number of films made in Singapore in the 1950s had portrayed downtown Singapore as a place to wander about for downcast individuals [usually new arrivals], as they seemingly reflect on their purpose of coming to the colonial city from their hometowns. Before Malaya Love Affair, such sequences had also appeared in 1953’s Hati Iblis/Devilish Hearts and Ibu/Mother.) 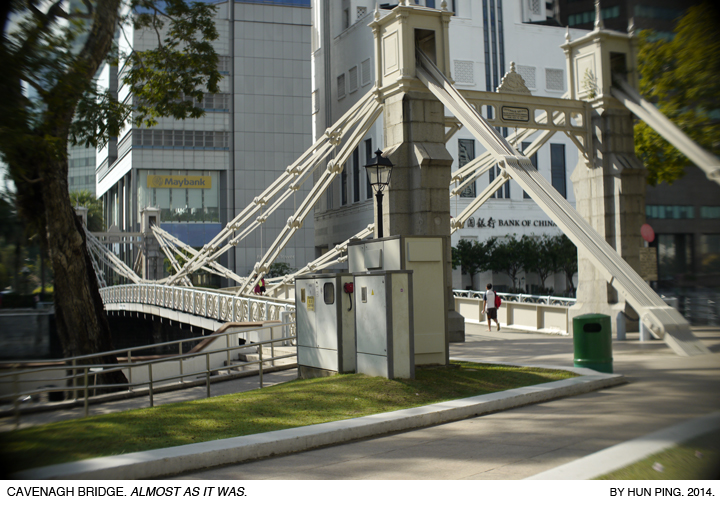 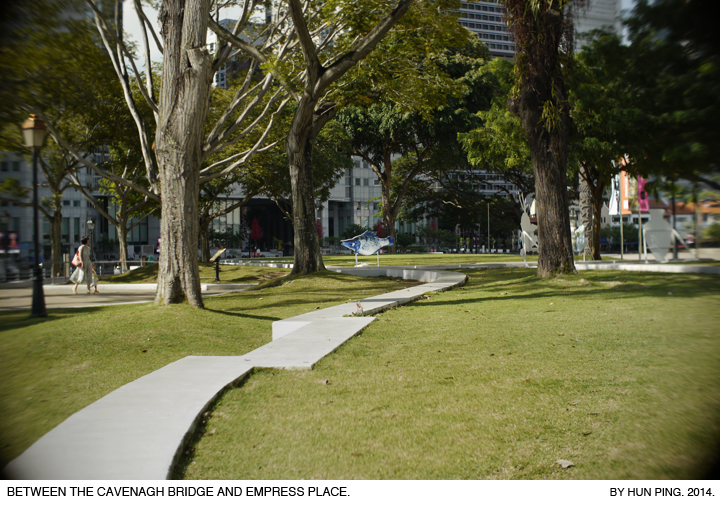 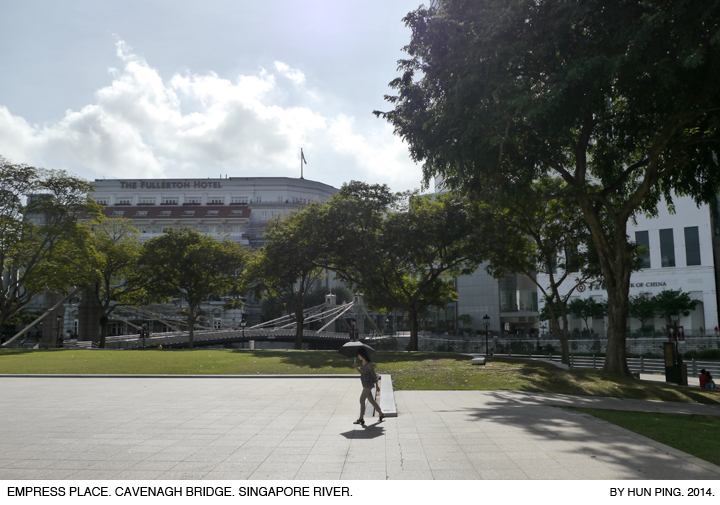 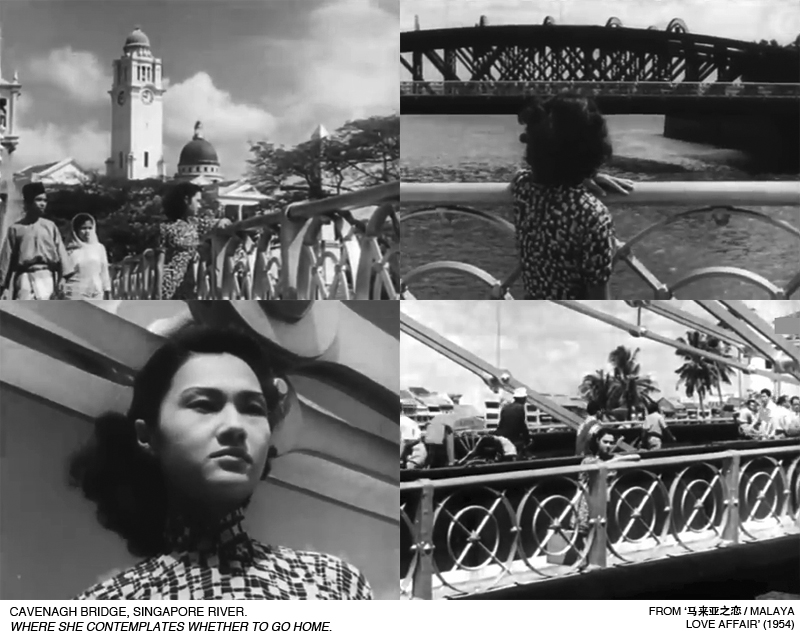 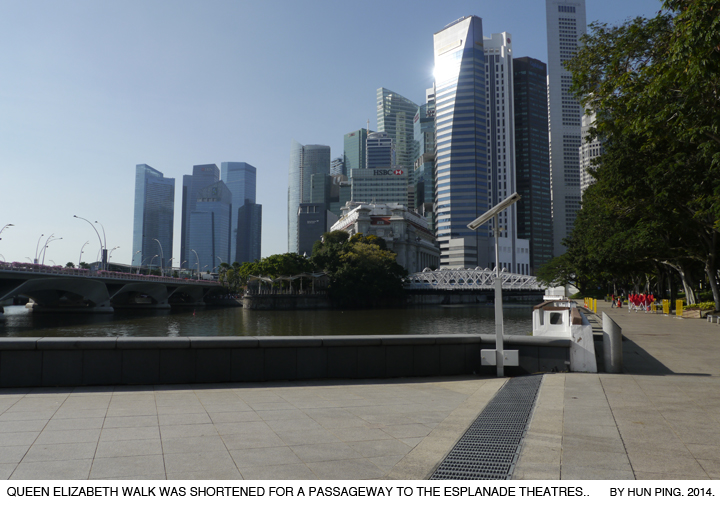 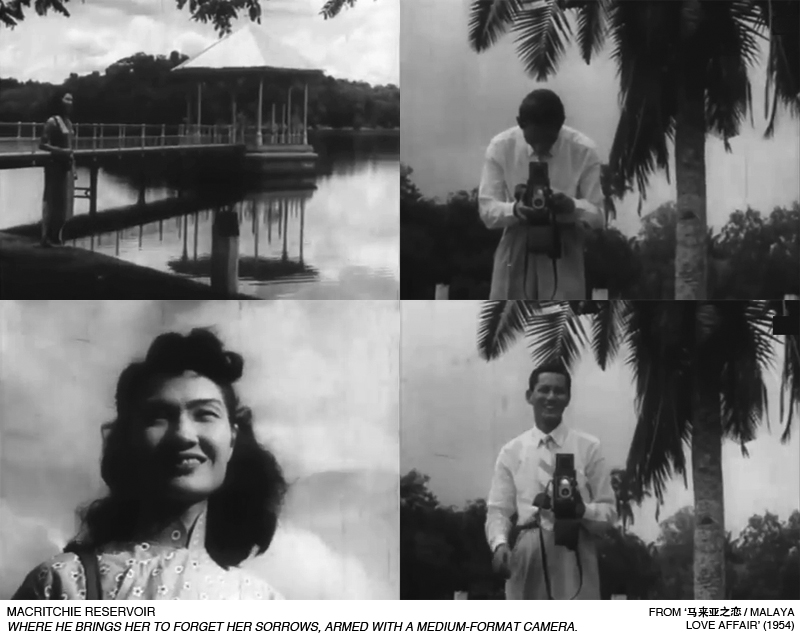