Film Locations:
Kampongs on the east coast of Singapore (at Siglap, Padang Terbakar and Tanah Merah)

‘PONTIANAK’ IS ONE AMONG THE NUMEROUS VAMPIRE-GHOSTS that thrive in Malay folklores and is commonly described as the ghost of a woman who died in childbirth, often taking on the guise of a scented, seductive girl. Sumpah Pontianak is the third in a trilogy of Pontianak-themed horror movies that capitalised on the local population’s fear for this most treacherous of vampires.

(The first two films in the well-acclaimed trilogy – Pontianak and Dendam Pontianak, both directed by B.N. Rao and released by the Cathay-Keris Studio in 1957 – are believed to be lost after Ho Ah Loke, the films’ producer, reportedly threw the prints down a mining pool in a fit of rage.)

The ‘Pontianak’ in the third installment, though, is a benevolent one who rescues her daughter and kampong dwellers from the threats of other devilish creatures. Actor Wahid Satay, who provided comic relief in the trilogy as a singing satay-seller, once revealed that the movies’ exterior scenes were filmed in kampong vicinities of Siglap, Padang Terbakar and Tanah Merah, all situated along Singapore’s eastern coast. They provided excellent rural settings for the films’ supernatural antagonists to perform their homicidal feats and induce panic in the fictional neighbourhoods. In the real world, little did the kampong residents expect that they would soon be facing something more haunting than pontianaks: the bulldozers summoned by government authorities to demolish their houses, beginning from the 1970s, up to the 1980s. These last surviving traditional (fishing) kampongs and their well-established communities were destined to make way for urban redevelopment – a comprehensive reinvention of the landscape to suit the needs of a modernizing, forward-looking industrial society. 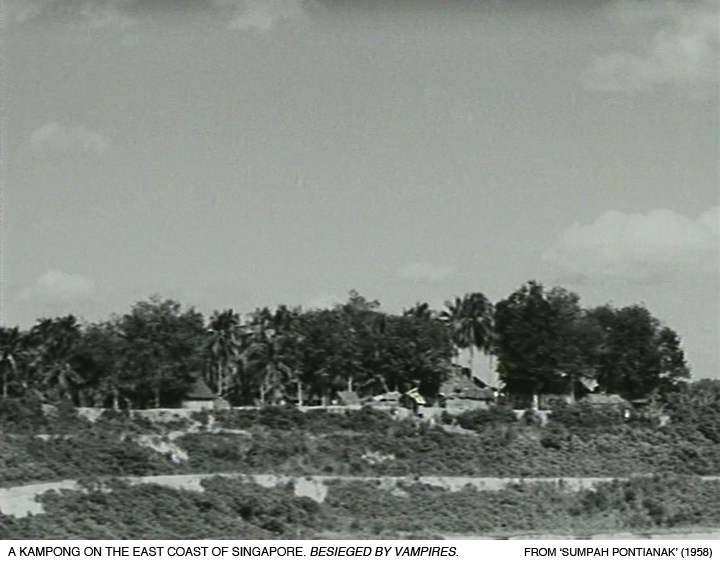 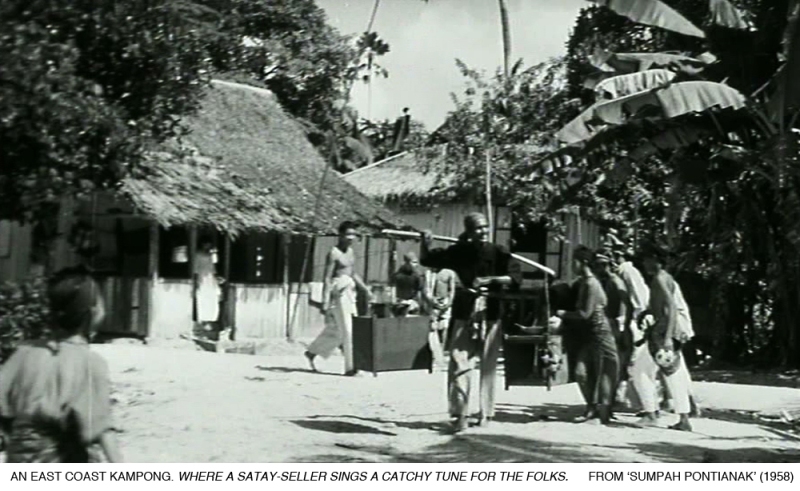 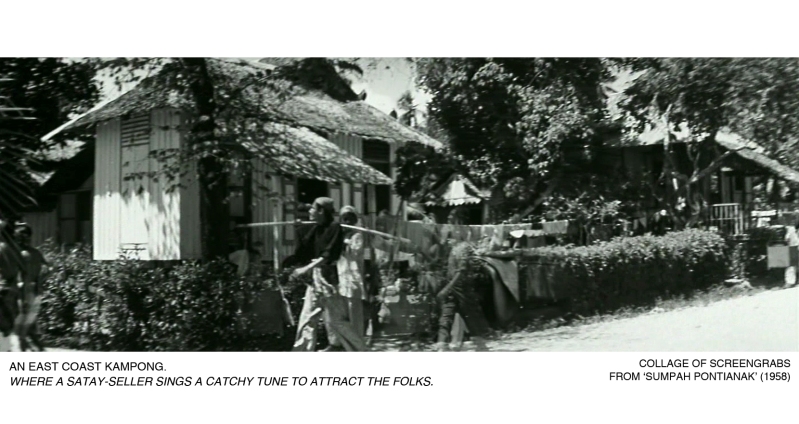 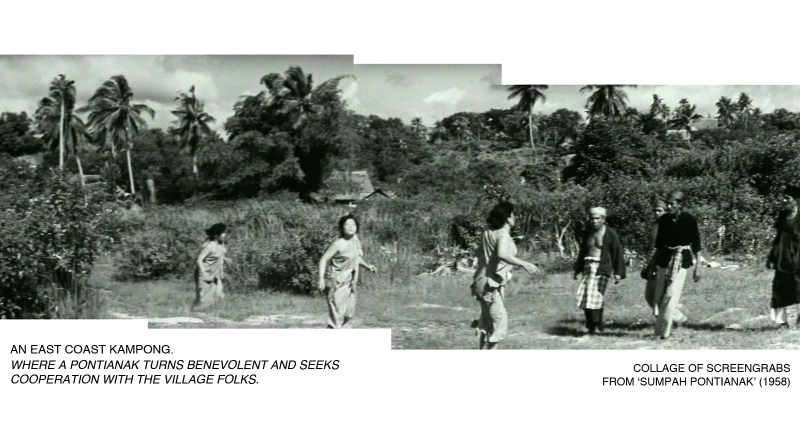 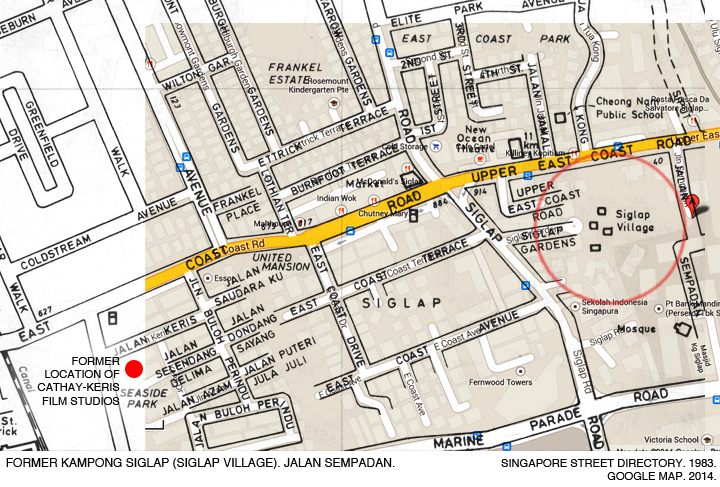 According to Malay legend, there were dark thunderclouds (or a solar eclipse according to other accounts) when a Malay chief from Sumatra, Tok Lasam, landed in the area during the 1820s. This led people to call the place ‘Siglap’ (derived from the Malay word ‘gelap’, meaning ‘darkness that conceals’.) Others attributed the kampong’s name to the overabundance of trees in the area, which allowed very little sunlight into the village, thus resulting in a “very dark” living environment.

Kampong Siglap and three other kampongs in the vicinity (Kg. Hajijah, Kg. Goh Choo & Kg. Lim Choo) were once vibrant fishing villages until massive land reclamation on Singapore’s east coast in the 1960s led many residents to abandon their original livelihood (fishing) to pursue other jobs. The sea was too far away from the kampongs and the water too deep for conventional methods of fishing. Many of the kampong folks moved away until there were only about 100 families left in the four kampongs in 1970. There had also been a huge fire in a section of Kampong Siglap in February 1962. It rendered 82 families homeless; the fire victims were later housed in new 5-storey Housing and Development Board (HDB) flats built over the fire site. (The four blocks of flats at the junction of Siglap Road and Upper East Coast Road are still standing today, but are due to be demolished in 2015 for “en-bloc” redevelopment. The residents will be relocated to Chai Chee.)

In the middle of 1985, the remaining villagers of Kampong Siglap (it grew to 346 families) were resettled once and for all; the kampong was demolished entirely and cleared the way for new residential developments by private property developers. 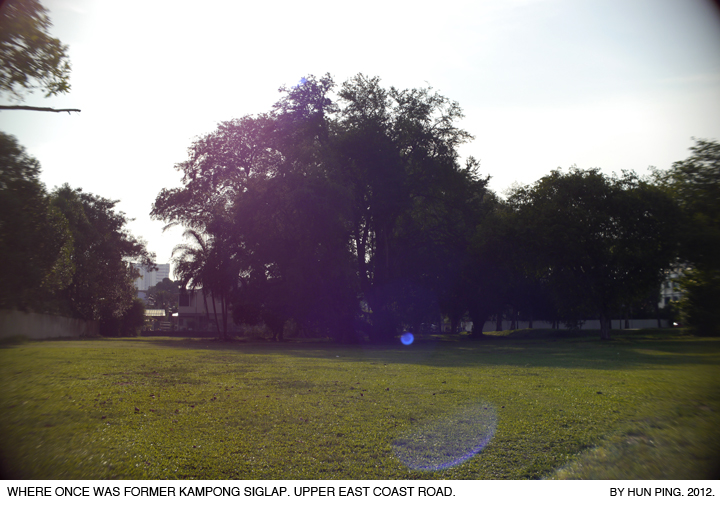 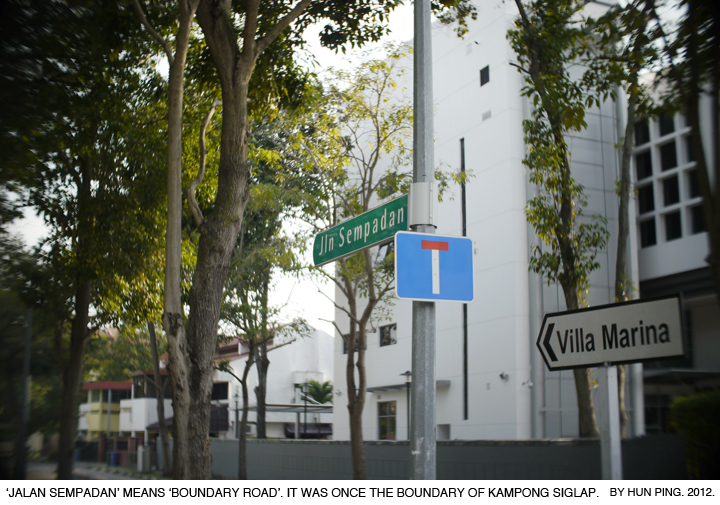 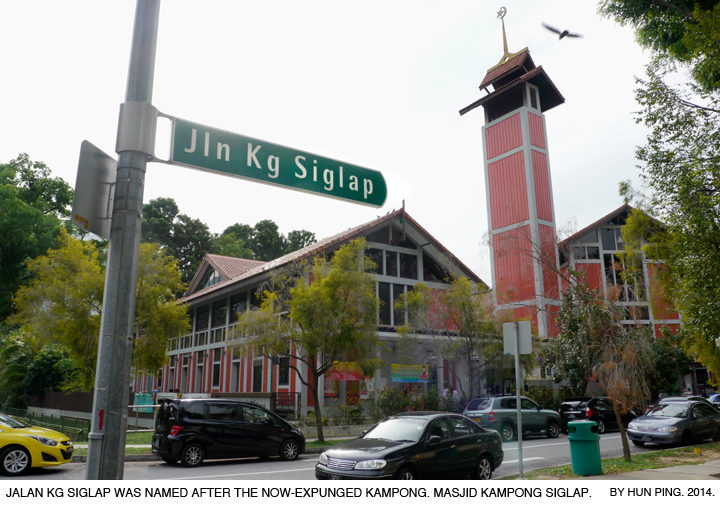 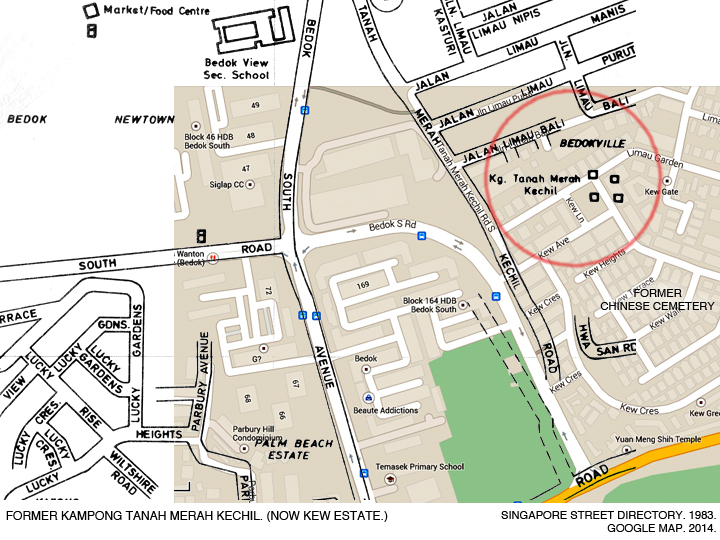 Tanah Merah Kechil means ‘small red earth’. The name ‘Tanah Merah’, which had appeared on maps of Singapore as early as the 17th century, is derived from the red lateritic cliffs found along the east coast that were visible from the sea. Cartographers of early Singapore maps even identified two areas with such distinctive geographical features – ‘Large Red Cliff’ (Tanah Merah Besar; in the Changi area) and ‘Little Red Cliff’ (Tanah Merah Kechil; in the Bedok area).

Kampong Tanah Merah Kechil was named after the road that ran beside it – Tanah Merah Kechil Road. The road itself was so named because it stretched from Upper Changi Road to the seafront, winding its way along the contours of the ‘little red cliff’ just off the coastline before meeting Upper East Coast Road. The ‘little red cliff’ (or Bedok Hill) was partially leveled in 1963, the soil being excavated to fill the sea for a Pilot Land Reclamation Scheme at Bedok; approximately 19 hectares of land reclaimed from the sea between Wyman’s Haven restaurant and Bedok Corner. 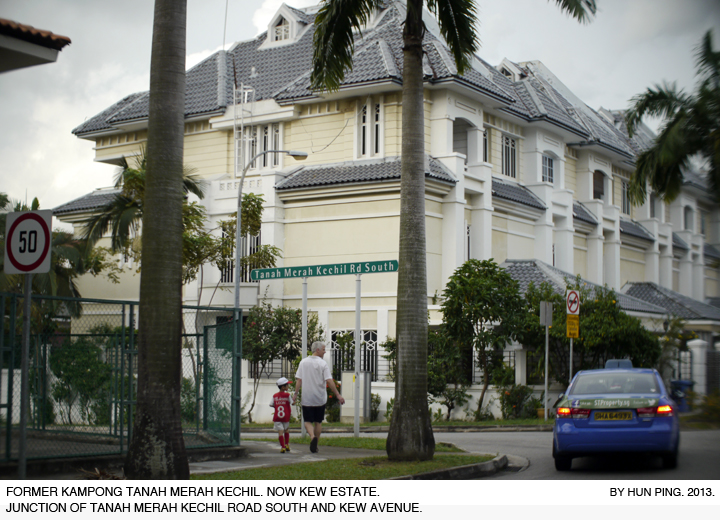 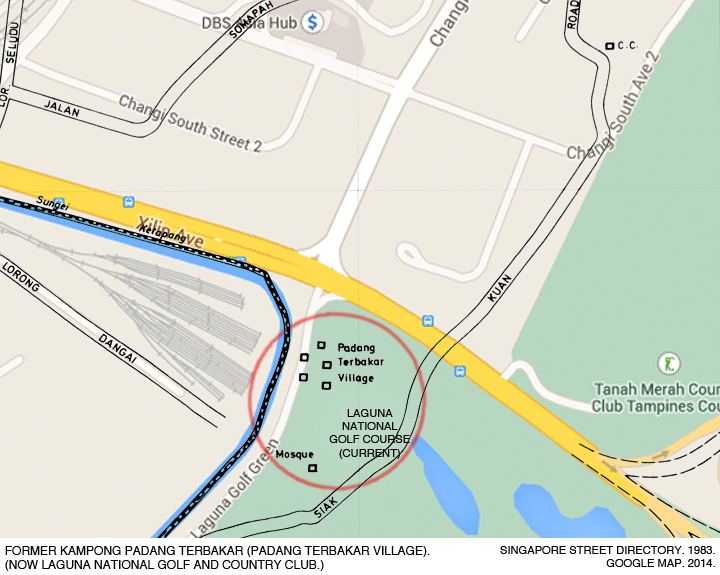 Padang Terbakar (which means ‘burning field’) derived its name from a field that often caught fire in the hot season every year. Others recalled that a Siamese businessman used to own that place which was near the beach, and villagers would burn the lallang and wood there so that they could collect the burnt wood for use or sale after the fire. The name ‘Padang Terbakar’, according to a former resident Hafiza Talib, has been in use since 180 years ago.

Kampong Padang Terbakar was originally a group of fishing villages that were established along the coastline in the Padang Terbakar area. During the 1970s, the kampongs’ fishermen suffered the same fate as those in Siglap, when land reclamation of the east coast between Bedok and Tanah Merah took place; their livelihoods were at risk and many had to pursue alternative careers. Kampong Padang Terbakar also made way for urban redevelopment in 1984-85; it was home to about 100 families then. Many of the former village residents were relocated to HDB flats in Tampines. The “expunging” of Padang Terbakar was so extreme that no traces of the kampong and its name remain at the area today. The Changi Business Park and the Laguna National Golf and Country Club now occupy the kampong’s former site and the golf club’s land lease has just recently been extended to the year 2040. (We still found it hard to fathom that a traditional kampong with an established name – where many generations of Malay families had lived – had to give way to a golf club known for its exclusivity and not readily open to the general public.) 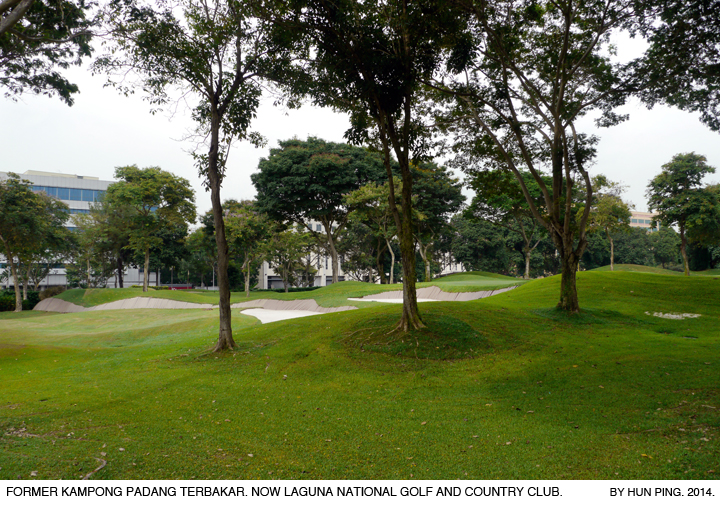 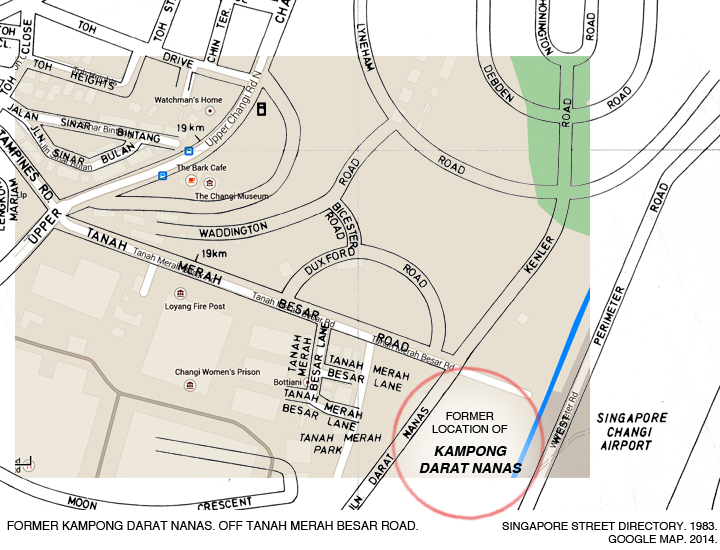 Located off Tanah Merah Besar Road (a road named after the original ‘large red cliff’ in the vicinity) and known for being the kampong “behind Changi Prison”, Kampong Darat Nanas (or Darat Nenas) probably got its name from the pineapple plantation that existed in the area during the early 1900s.It was not known when the kampong was founded, but its population increased most significantly after the war, during the 1950s. In 1984-85, the kampong’s residents were forced to move out and be resettled to HDB flats. Kampong Darat Nanas shares a similar fate as Kampong Padang Terbakar – no physical traces of it remain, other than the overgrown road that was formerly named after the kampong (Jalan Darat Nanas; it had already been taken off maps and street directories). Large portions of the kampong’s former site remains undeveloped for now – an MRT train tunnel is beneath it; the now-forested site appears to be sandwiched between the Changi prison/aviation industrial estate (JTC-built) and a Public Utilities Board (PUB) canal that runs parallel to the west perimeter of the Changi airport. 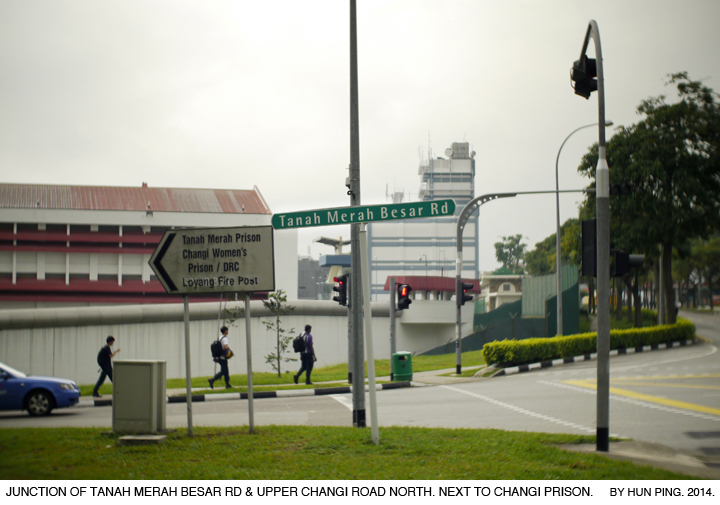 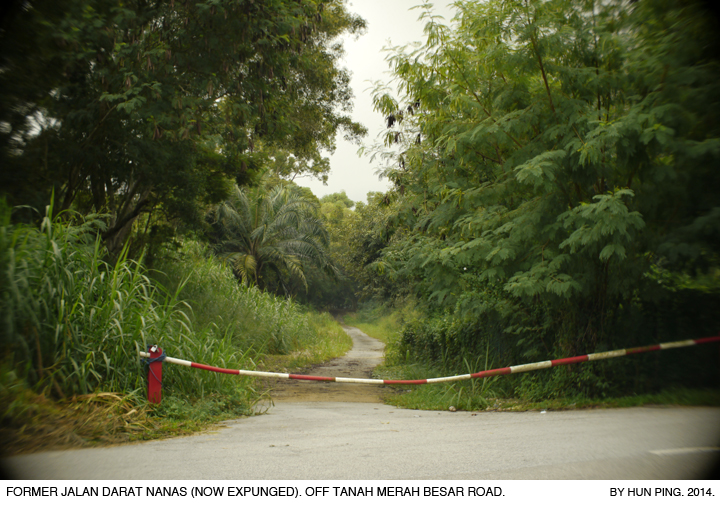 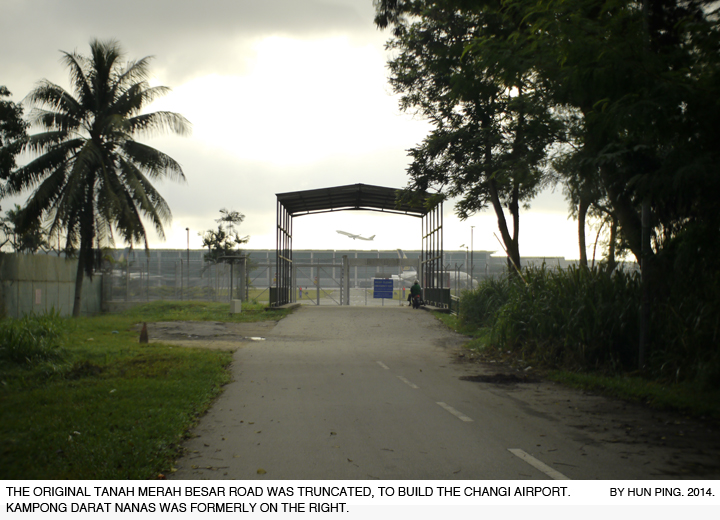 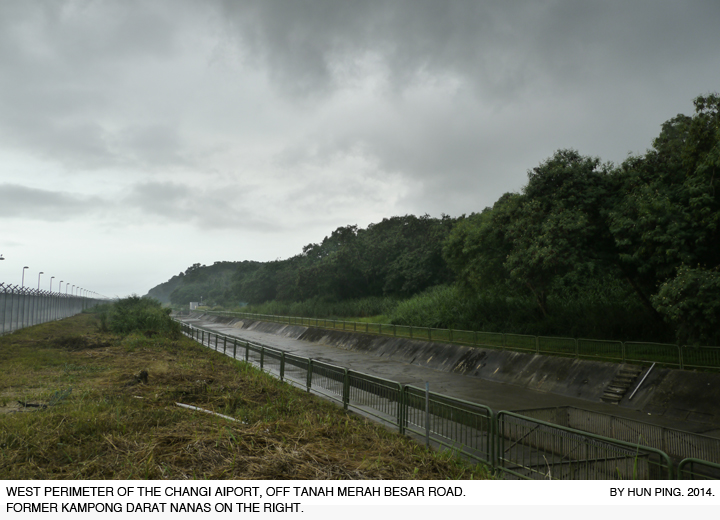