‘BAWANG MERAH DAN BAWANG PUTEH’ IS A TRADITIONAL MALAY FOLKLORE that centers on the rivalry of two half sisters whose fates take several dramatic and magical turns after their common father passed away. Like most folk tales that are passed down through the oral tradition, ‘Bawang Merah Bawang Puteh’ has been retold in several versions, and the majority of them cast Bawang Merah (‘Shallots’) as the malevolent sister who mistreats Bawang Puteh (‘Garlic’) the abused half-sister whose mother drowns in a well and reincarnates into first a talking fish, and then a banyan tree with a magical swing.

When the Cathay-Keris studio decided to adapt the fantastical folklore into a film in the late 1950s, the director (S. Roomai Noor) and the scriptwriter (Salleh Ghani) took the liberty to reverse the usual characterization, and cast Bawang Merah as the benevolent and orphaned half-sister instead. On the other hand, Bawang Puteh and her mother Kundor become the wicked pair, whose terrorizing ways would fail to stop Merah from receiving the blessings of her dead mother’s spirit and happily marrying a prince.

The run-up to the production of the movie was frequently publicized in the newspapers, as the film’s director S. Roomai Noor openly called for help in the search for the most suitably-sized fish (‘ikan kaloi’ a.k.a. giant gourami) and the best-looking banyan tree (pohon beringin) – the two things that were so crucial to the film story. The studio even offered rewards for suggesting banyan trees that might fit the director’s requirements (“it must be isolated from houses and away from the roads”, “it must be in Singapore…”) The search for the right banyan tree reportedly took S. Roomai Noor to Alexandra and Changi, but he eventually settled for one that was situated in Bukit Timah – a tall and sturdy one that could support the installation of an artificial “magical” swing that would appear to be made of the tree’s hanging aerial roots. This would be the tree that grows out of the buried bones of the talking fish that Bawang Merah’s mother reincarnated into. Merah’s enchanting voice and mannerisms as she rides the self-propelling swing of the banyan tree would then attract the attention of a prince who is out hunting…

We thought it might be interesting to track down the specific location of the banyan tree in Bawang Puteh Bawang Merah. The newspaper reports on the film didn’t reveal much besides its general location – Bukit Timah. We figured that our search might take a long while, but nonetheless started with a place in Singapore near Bukit Timah where trees would most likely survive the ravages of urbanization and redevelopment of the 55 odd years since the making of the film: Botanic Gardens. A morning’s walk in the expansive park that stretches from Tanglin to Bukit Timah shows up three potential “candidates”. It’s really a wee bit tough to tell if any one of them was the same banyan tree in the film after so many years. But a little imagination and “fantasization” would help, we guess. 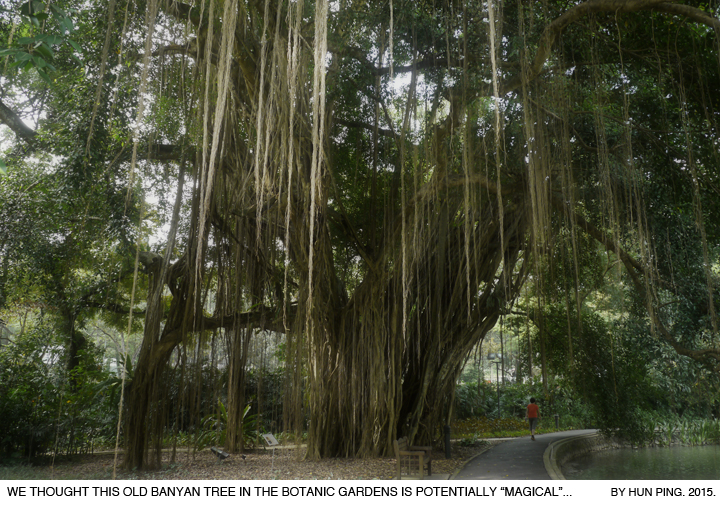 The Botanic Gardens also happened to be the chosen location to act as the garden in the prince’s palace. After Bawang Merah and the prince’s marriage, she and her entourage while away their time in the garden, “sashaying” and dancing to songs that extol the orchids that grew in the garden since the her arrival at the palace. They took turns walking down and around a ‘trellis covered walkway with red brick pillars’, which we suppose was a popular dating or tourist spot that was (is) just a stone’s throw away from the iconic Bandstand. In recent times, this red brick pillared walkway looks somewhat neglected, paling considerably to the new attractions that are being introduced to the park. 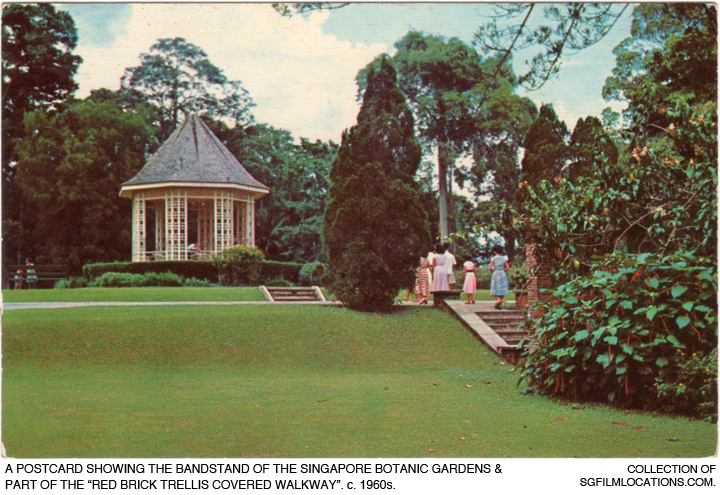 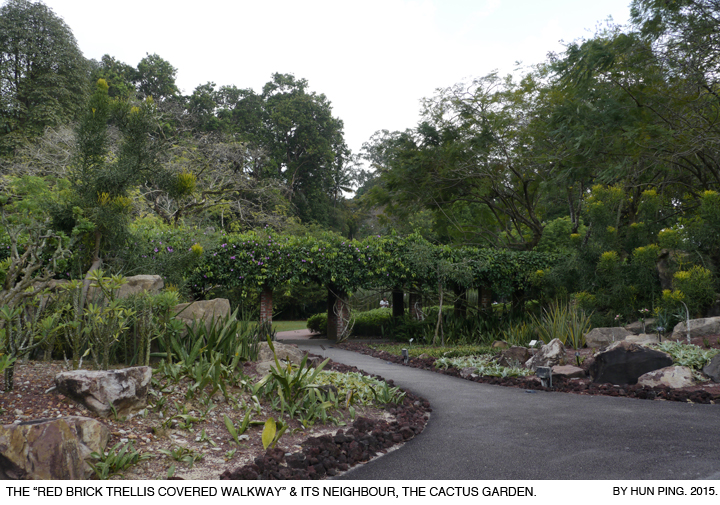