Movie production in Singapore by local filmmakers first started in July 1926, when Low Poey Kim (Liu Bei-jin, 刘贝锦), a Singapore-born entrepreneur, established the Nanyang Low Poey Kim Motion Picture Co., Singapore / 南洋刘贝锦自制影片公司. He founded the company in the hope of creating, as a precedent, Chinese films with a Nanyang (literally ‘South Seas’; broadly refers to Southeast Asia) flavour using homegrown talents. He initially set up an office on the 3rd floor of a shophouse at 12, Pekin Street, the address of Low’s film distribution company ‘Anglo-Chinese Film Co.’. Then, a rented bungalow at 58, Meyer Road in Katong, on the eastern outskirts of downtown Singapore, was used as the film studio. It produced a silent feature film New Friend/新客 (Guo Chao-wen 郭超文, 1927) which told the story of a fresh Chinese immigrant’s experiences in Singapore and Johore. The film had one preview screening in Victoria Theatre on 4 March 1927, though the British colonial authorities did not grant approval to show the last 3 of the full 9 film reels. The film studio subsequently moved to 333, Pasir Panjang Road, and was shooting its second feature The Arduous Journey Ahead/行不得也哥哥 (Guo Chao-wen, incomplete) when Low abruptly closed the film company for good in May 1927. 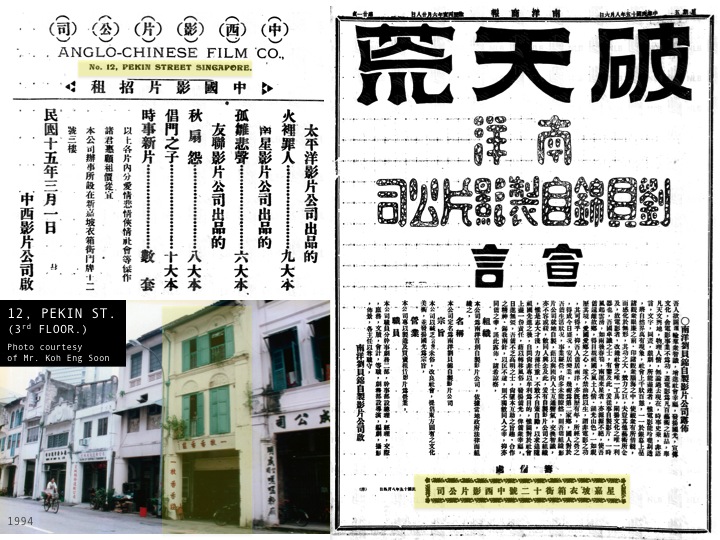 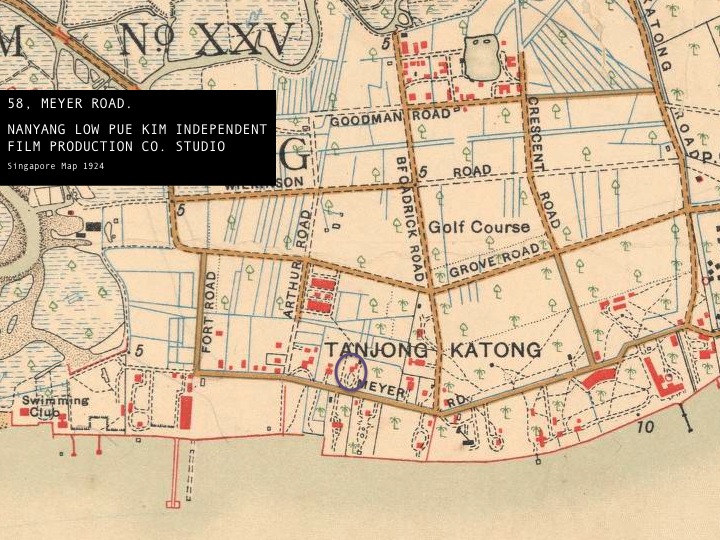 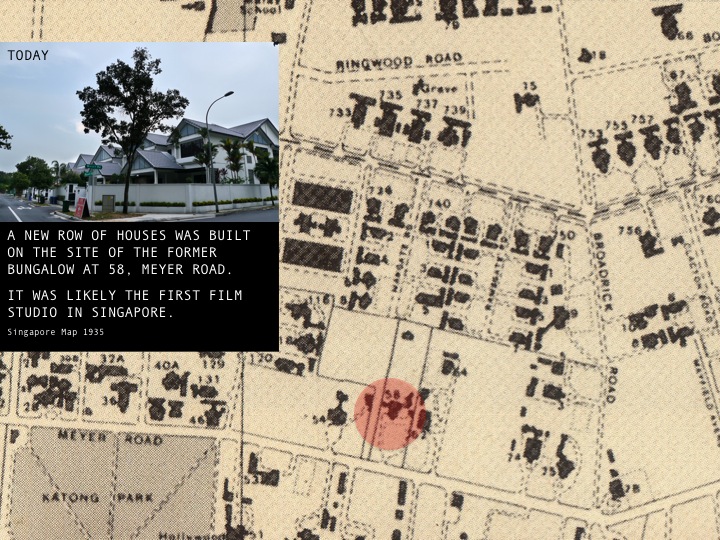 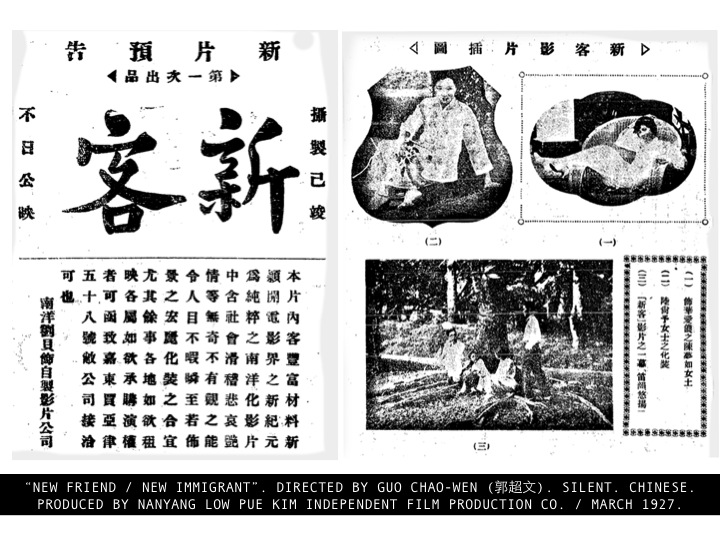 Local film studio activity in Singapore probably laid dormant for the next six years, until Motilal Chamria (also spelled ‘Motilal Chamaria’) – an industrialist and film producer from Calcutta – set up Indo-Malay Talkies in May 1933, along the same road where Low Pue Kim left off, at Lions’ Gate, Pasir Panjang Road. “A miniature Hollywood is springing up on the outskirts of Singapore,“ was how The Straits Times (21 May 1933, p. 9) described it. With B.S. Rajhans – an Indian film director who would make a greater impact in Singapore’s post-World War II film industry – at the helm, the studio by the seafront aimed to produce films with “a local atmosphere and featuring Malay artistes” (The Singapore Free Press, 12 May 1933, p. 7). Eventually, the only film Motilal Chamria produced in Singapore was Leila Majnun, which premiered in March 1934 at Singapore’s Marlborough Theatre. It was “the first spectacular Colossal Malay Talkie… world famous Arabian immortal love tragedy of 1000 years ago,” the film’s advertisement in the press boasted (The Straits Times, 27 March 1934, p. 6). 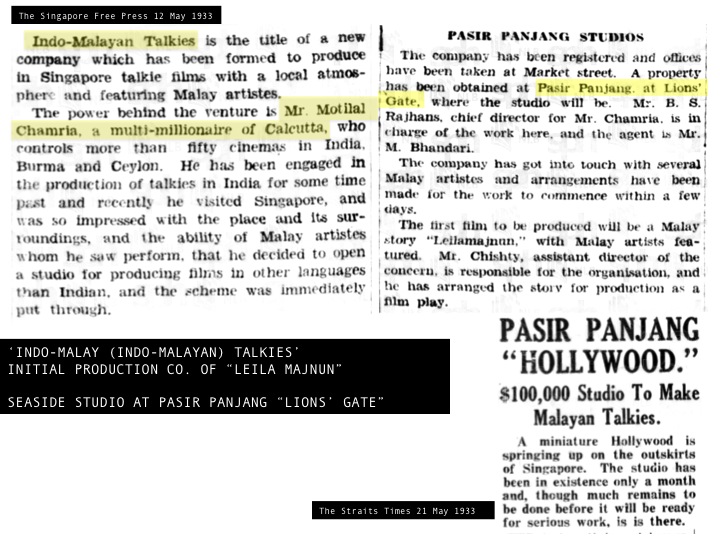 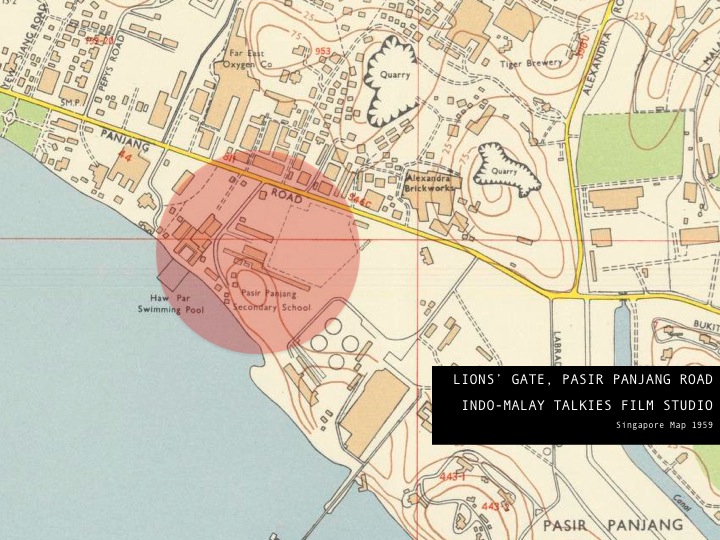 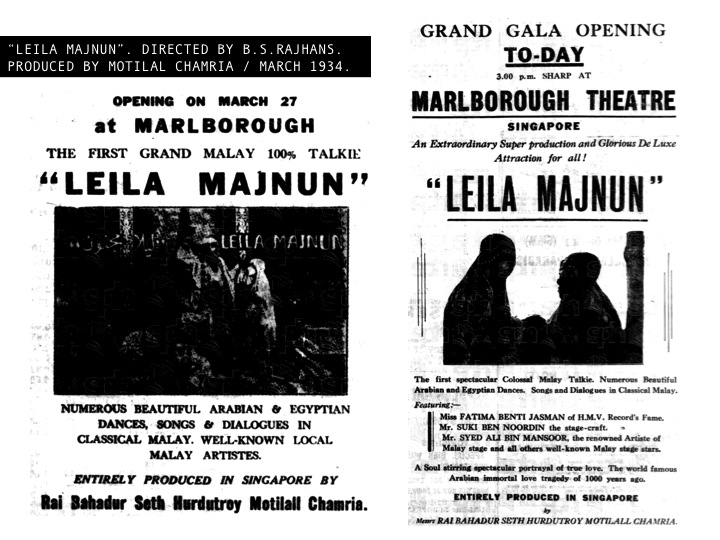 The Shaw Brothers Ltd. – a well-established film distributor and cinema operator in Malaya run by brothers Runme Shaw 邵仁枚 and Run Run Shaw 邵逸夫 – also began producing films locally in 1940. They imported Chinese directors, technical expertise and second-hand equipment from Hong Kong, while recruiting local Malay (bangsawan) artistes to act for a handful of Malay films with titles such as Mutiara/Pearl, Bermadu/Polygamy, and Toping Saitan/The Devil’s Mask (all directed by Hou Yao 侯曜 and Wan Hoi-ling 尹海灵, 1940-41). To facilitate the expansion of their film business, the Shaw brothers converted a warehouse into a film studio at 8, Jalan Ampas, off Balestier Road, a suburban location not too far from downtown Singapore. There were ambitious proposals to produce Malay and Cantonese talkies at a rate of one film a month and establish a newsreel service. However, the Japanese Occupation (1942-1945) put paid to their plans. 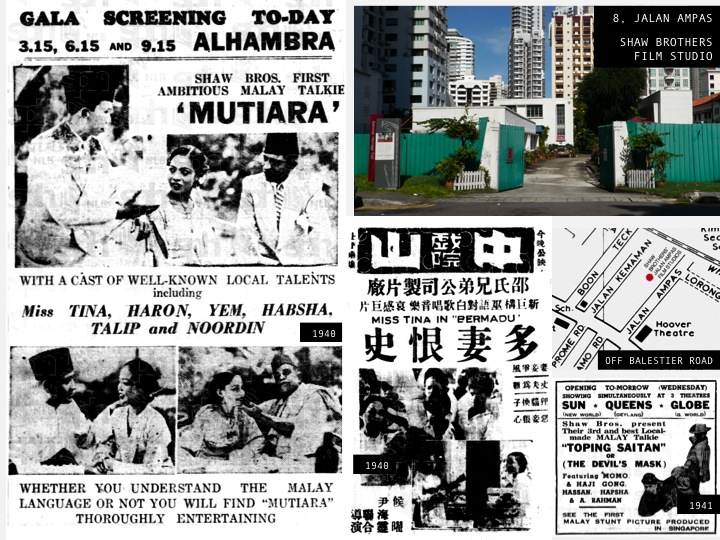 After the Japanese surrendered, there was a flurry of interest in making movies about the war and occupation experience. A group of Chinese artistes active in local theatre and performance troupes joined China Film Studio / 中华电影制片厂, which set up its studio in a mansion along Lorong 24 Geylang, in the heart of what is today a famous red-light district. The studio produced a trilogy of films about the tribulations of overseas Chinese during the Japanese occupation – among which Blood and Tears of Overseas Chinese/华侨血泪 (Cai Wen-jin 蔡问津, 1946) and Spirit of Overseas Chinese/海外征魂 (Wan Hoi-ling 尹海灵, 1946) still exist to this day. (All the locally-produced films made before the war were presumed lost.) Film technical expertise was rare in the immediate post-war era, so it was no coincidence that one of the cameramen of China Film Studio, Tsin Ming Chin 秦民勤, was also hired to take control of the camera at Malayan Arts Productions, a film company establised in early 1947 by S.M.A.H. Chisty (Syed Mohamed Abdul Hameed Chisty), who had earlier been involved in the setting-up of 1933’s Indo-Malay Talkies. The aforementioned B.S. Rajhans directed its first feature film Seruan Merdeka/Call of Freedom(1947) with a multi-racial cast using temporary studios in the compounds of Istana Kampong Glam. It was the first Malay film after the liberation, and dealt “with the exploits of Malays who worked in Japanese-occupied Singapore in 1942 and their adventures with the guerillas in the wilds of the Johore jungle” (The Singapore Free Press, 19 August 1947, p. 5). Seruan Merdeka premiered at the Queens Theatre in August 1947, and was the only film released by Malayan Arts Productions. 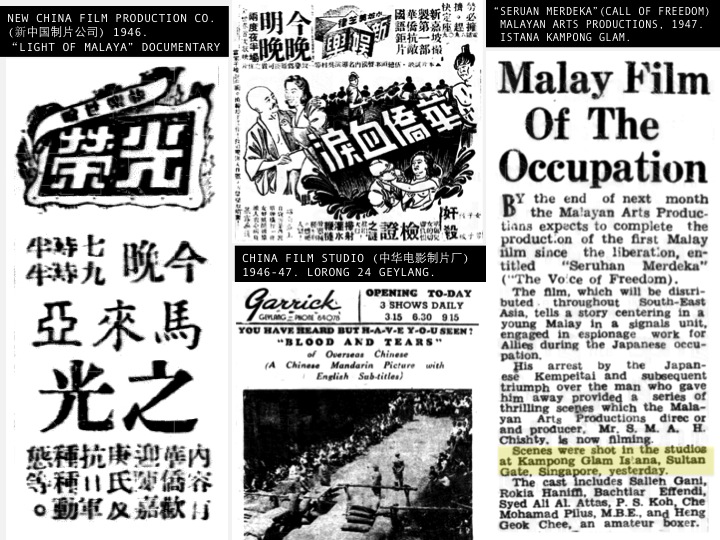 The Shaw Brothers joined in the fray of making occupation-related films by reopening its Jalan Ampas studio to produce its own trilogy of post-war Chinese films. They also revived their Malay film venture by employing seasoned director B.S. Rajhans to oversee production, and beefed up studio facilities with American imports. They founded Malay Film Productions Ltd. (MFP) in August 1949 to churn out huge outputs of popular Malay films to feed their expanding film exhibition circuit. At its peak in the 1950s, MFP was producing more than ten films a year. The Jalan Ampas film studio was even prominently featured in several MFP films, eg. as a factory with picketing workers in Mogok/On Strike (K.M. Basker, 1957) and as itself, a ‘dream factory’, in Seniman Bujang Lapok/The Nitwit Movie Stars (P. Ramlee, 1961). By then, Shaw Brothers had acquired the studio‘s neighbouring land plots to build new soundstages, rebuilt the old studio complex, housed their employees in quarters at nearby Boon Teck Road, and further upgraded MFP’s studio and lab equipment. (The half-abandoned buildings at 8, Jalan Ampas are still standing today.) 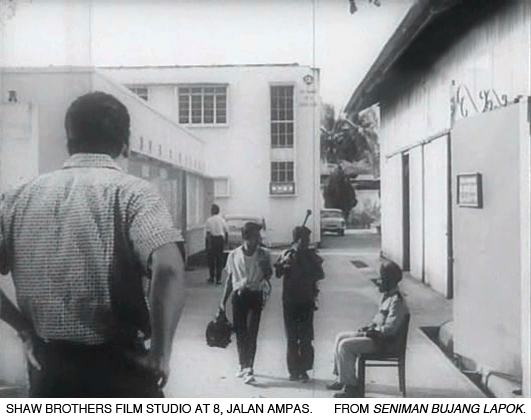 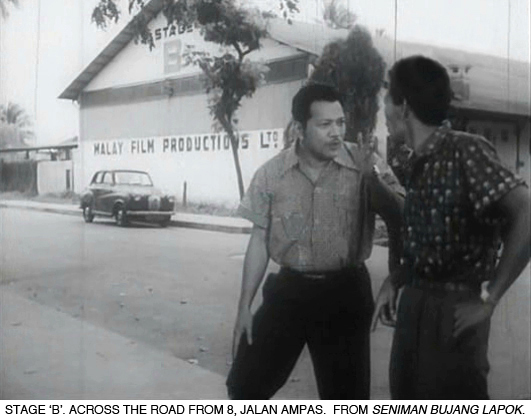 Competition to MFP’s monopoly on local Malay film production came from two studios established in the 1950s – Nusantara and Cathay-Keris, with the latter becoming arguably as successful and prolific as MFP. The Nusantara Film Productions Ltd (‘Nusantara’ refers to the Malay Archipelago) was founded in circa 1950-51 with funding from Penang movie magnate Ong Keng Huat 王景发. It took over equipment left behind by China Film Studio and was managed by Hsu Chiao Meng 徐蕉明 (also ‘徐蕉萌’ or ‘徐焦萌’), who first arrived in Singapore from China in 1940 with a drama troupe as head of its film and photography department. After the war, he was engaged as the cameraman for a local Chinese documentary film about the guerilla struggle against the Japanese – Light of Malaya/马来亚之光 (Liu Man 刘漫, 1946, produced by New China Film Production Co. 新中国制片公司).

Nusantara’s first film studio was located in the South Winds Hotel at Tanjung Balai (a remote location in the western part of Singapore; now the Jurong Fishery Port). Then, it moved to a former (soap?) factory at Bukit Timah Road 8th milestone (219J, De Souza Avenue). The studio was noted for being the first to use Malay directors such as A.R. Tompel and Naz Achnas, in contrast to MFP which had mostly employed non-Malay directors from overseas (India and Philippines). After an output of about a dozen Malay films, Nusantara ceased production due to the lack of access to local exhibition venues, and also after Indonesia, then a lucrative market for its films, imposed import restrictions on Malay films made in Malaya/Singapore. Nusantara Film Productions Ltd’s premises at Bukit Timah became an independent “for-hire” film factory also known as Nanfang Film Studio/南方制片厂, and was used in the shooting of a number of local Amoy Dialect (Hokkien) and Mandarin films up to the 1960s – such as Love Deep As the Sea/恩情深似海 (But Fu 毕虎, 1954) and Black Gold/黑金 (Yi Shui 易水, 1962). It also lent support to Hong Kong film companies while they were shooting on location in Singapore (eg. Cantonese film Belle in Penang/槟城艳 [Lee Tit 李铁, 1954]). Alternatively, the same film production facility in Bukit Timah might likely be called Cinecraft Studio, when rented by independent firms to shoot Malay films, for example, Maria Menado Production’s Raja Bersiong/The King with Fangs (K.M. Basker, 1963.) 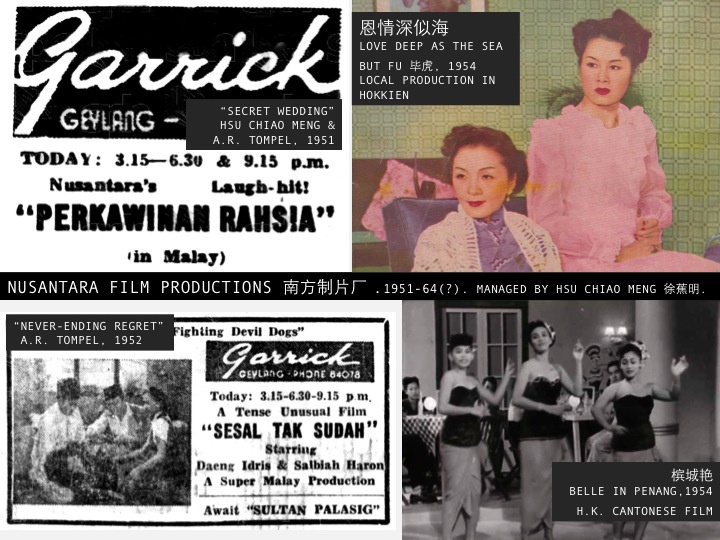 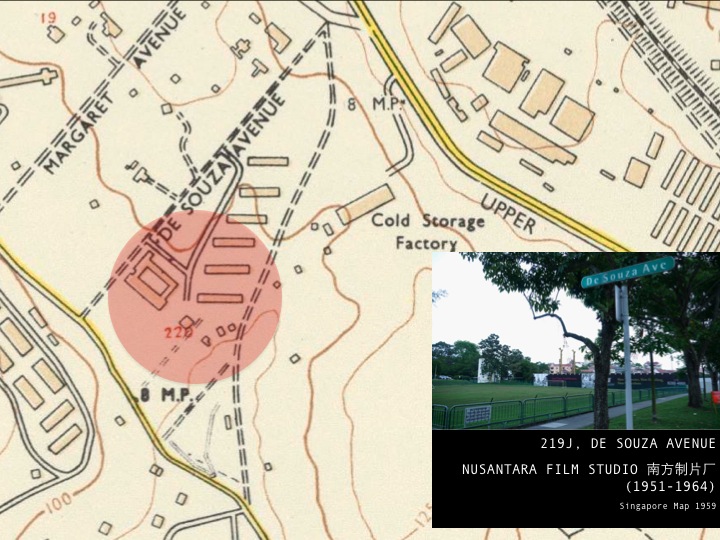 Cathay-Keris had its roots in Rimau Film Productions, which was founded in circa 1951 by an enterprising and well-known film exhibitor, Ho Ah Loke 何亚禄, with Gian Singh & Co. For studio shoots, Ho also built the Keris Film Studio at Tampines Road 9th milestone (opposite Lorong Tuwu), consisting of two makeshift tin sheds at the far northeastern reaches of the Singapore island. After two unprofitable Malay films, Gian Singh pulled out of the venture. The irrepressible Ho renamed his company Keris Film Productions and persisted with making creative, homegrown movies that were characteristically Malay or Malayan, often drawing on local folklore and novels. Circa 1951-52, Keris Films even attempted to produce the first-ever colour Malay feature film Perwira di-Lautan Tedoh/Warriors of the Pacific (Jaafar Wiryo), of which the shooting was complete, but the film was lost on its way to the processing labs in London.

Later, Ho collaborated with Cathay Organisation’s head Loke Wan Tho 陆运涛 to form Cathay-Keris Films in 1953, with a new studio complex at 532D, East Coast Road, in Siglap, including two new soundstages and existing buildings that were former barracks used by the Japanese. (An estate of private terrace houses now stands in its place.) Interestingly, roads in the vicinity of the studio were later named after its earliest film releases: Jalan Buloh Perindu (after the studio’s first successful colour Malay film production), Jalan Saudara Ku, Jalan Dondang Sayang, Jalan Azam and Jalan Selendang Delima. These roads and the studio complex were also used for on-location shoots in films produced by Cathay-Keris – for example, in Gado-Gado (S.Roomai Noor, 1961) where Wahid Satay finds employment as a lawn-mower; as a hospital in Mat Tiga Suku/Mat Crazy (Mat Sentol, 1964) and; as almost anything that Mat Sentol imagined it to be in Mat Bond (Mat Sentol, 1967). In Muda Mudi/The Young Ones (M. Amin, 1965), a story about an aging and out-of-favour actress, one would be able to see portrayals of studio life in Cathay-Keris. 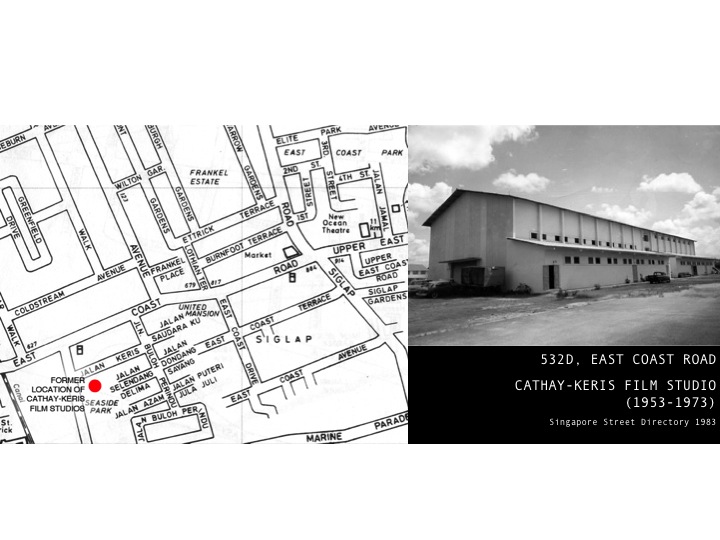 Adopting a similar strategy as the Shaw Brothers – vertical integration of film production, distribution and exhibition within a single organization, Cathay-Keris would release a total of 125 feature films (the majority were Malay films) in its twenty years of existence (1953-1973). Add to that Shaw Brothers’ output of more than 150 Malay films (1947-1967), the total oeuvre by the two major studios was considered astounding, in an era now often lauded as the ‘Golden Age of Malay Cinema’. A mix of political factors (the Confrontation, the Singapore-Malaysia split), labour issues and competition from television led to declining box-office receipts, financial losses and the ultimate decision to close the MFP and Cathay-Keris studios in 1967 and 1973 respectively, thus marking the end of a boom period for local movie production and the start of a lull until the next ‘revivals’ in the 1990s and beyond.

Note: A shorter version of this essay was first published in ‘World Film Locations: Singapore’ (Intellect Books, 2014) under the title ‘Singapore: City of the Imagination’. The version released here provides updated information with additional maps and photographs.