Chinta is one of the oldest surviving feature films by a Singapore-registered movie company, and the earliest of extant films produced by the Shaw Brothers in Singapore. Prior to this movie, the Shaw Brothers Ltd – a well-established film distributor and cinema operator owned by brothers Runme and Run Run in Malaya and Singapore – had already ventured into local movie production as early as 1940. They had employed Chinese directors, technical expertise and second-hand equipment from Hong Kong, while recruiting local Malay (bangsawan) artistes to act for a handful of Malay films with titles such as 1940’s Mutiara/Pearl, Bermadu/Polygamy, and 1941’s Toping Saitan/Devil’s Mask (all directed by Hou Yao 侯曜 and Wan Hoi-ling 尹海灵). The Japanese Occupation (1942 – 1945) put a halt to the Shaws’ ambitious plans to produce Malay and Cantonese ‘talkies’ at a rate of one film a month and even establish a newsreel service. After the war, the Shaw Brothers made a trilogy of occupation-related Chinese films – which followed a trend that began with Blood and Tears of Overseas Chinese/华侨血泪 (Cai Wen-jin 蔡问津, 1946) produced by Singapore’s Zhonghua Film Production Studio 中华电影制片厂. (This is likely the oldest surviving feature film made by a locally based film company; it is available for viewing at the Hong Kong Film Archives.)

By 1948, the Shaw Brothers had also revived their Malay film venture by employing Indian director B.S. Rajhans – a seasoned hand who had directed the earliest films ever produced by Singapore, such as 1933’s Leila Majnun – to oversee production at their existing film studio at 8 Jalan Ampas, off Balestier Road. They beefed up facilities in the studio with American imports and founded Malay Film Productions Ltd in the late 1940s to churn out huge outputs of popular Malay films to feed their expanding film exhibition circuit. Chinta is the fourth (and oldest existing) film in the Shaw Brothers’ post-war Malay films oeuvre, coming after Singapura Di Waktu Malam/Night Time in Singapore, Chempaka/Frangipani and Pisau Berachun/Poisoned Knife (these three films are now considered lost.)

In the film, Chinta (Siput Sarawak) is a girl brought up in an idyllic coastal village, and unaware of her true identity as the princess and heir to the neighbouring Indrapuri kingdom. She falls in love with Sanchi (S. Roomai Noor) – a trader washed ashore after a shipwreck – whom she and her foster father nursed back to health. However, Sanchi had hidden the truth that he is the incumbent king of Indrapuri and descendent of coup perpetrators who had murdered Chinta’s parents to take over their kingdom. After Chinta’s foster father reveals to her the facts of her royal background, she leaves behind her carefree days of merry-making at the beaches and mangrove lagoons, and prepares for vengeance; a revenge that turns out to be unwittingly directed at her most beloved Sanchi.

Do not expect Chinta to be a typical revenge film though. Clearly inspired by the popular Metro-Goldwyn-Mayer (MGM) musicals of the time, Chinta is instead a musical love story that featured alluring sarong-clad women with bare shoulders, singing, dancing and swimming by the coast, as well-built fishermen and handsome guests row to shore in their sampans to the villagers’ delight. Romance and sexiness, not bloodshed, are the calling cards of the movie.

In the film’s narrative, ‘Indrapuri’ is the name of a fictional North Brunei kingdom in existence more than 500 years ago. In reality, ‘Indra Puri’ was the name of an ancient Hindu kingdom based in North Sumatra, where Aceh Besar Regency, Indonesia, is situated today. Shaw Brothers’ film crew did not have to travel far to Brunei or Aceh for coastal village locations that might be fit for the environs of the fictional Indrapuri kingdom. They found them on the island of Singapore — a late-1940s Singapore still recovering from the aftermath of the Japanese Occupation, with an island landscape yet to witness overt urbanisation and still with much natural coastlines to boast of.

According to a Straits Times report (‘Chinta’ is a big success’, 31 Oct 1948, p. 7), most of Chinta’s “outside shots were taken close to Ponggol Beach on Singapore Island”. The rocky intertidal shores and mangrove beaches that used to surround Punggol Point (Tanjong Punggol) masqueraded as the idyllic coastal village where Chinta, daughter of the deposed Indrapuri king, is placed in refuge. The film and its actors rather exploited the coastal features of Tanjong Punggol to their fullest: singing and cavorting on the sandy beaches; posing sexily against a rocky cliff; taking (synchronised) dips in the pristine-looking waters; rowing sampans with the long coastline of Pasir Gudang as backdrop; caressing one another while seated on exposed coastal rocks during high tide; and frolicking among the stilt roots of the Bakau (Rhizophora sp.) mangrove tree.

These were also likely the same Punggol foreshores where the brutal Japanese Kempeitai (military police) shot dead hundreds of Chinese civilians during a Sook Ching purging operation on 23 February 1942, a mere six years before the production of Chinta. There laid the bodies of Chinese males who were rounded up from communities living along Upper Serangoon Road and deemed to be anti-Japanese elements dangerous to the new regime. Seen in this light, the shores depicted in the movie were perhaps not as idyllic as they were meant to be. This lack in the idyllic is even more apparent in recent times as the view out from Punggol Point, which was once of the rural Pasir Gudang and coastal kampongs Ayer Biru and Pasir Merah (Punggol’s opposite coast across the Johor Straits), had turned into one of a massive complex of heavy industries, port terminals and oil refineries. On the Singapore side, it is likely that none of the natural coastlines in Punggol that were used as film locations for Chinta are in existence today; they have been lost to reclamation and man-made seafront promenades. Punggol Point is also fast transforming into a high-value waterfront property populated by clusters of shopping, dining and leisure spots. A few developers have started the ball rolling. The newest kid on the block named itself ‘The Punggol Settlement’.

What formed the backdrop to the above scenes of sampan-rowing filmed off Punggol Point was the Johor coastline of the Tebrau (or Johor) Strait, inhabited in parts by the villagers of Kampong Ayer Biru and Kampong Pasir Merah. An extract from a 1941 map of Singapore (see map below) shows us the positions of the kampungs relative to Punggol Point. Academic Mariam Ali had reported in an essay (see ‘Further Reading’ below) that a group of people collectively known as the ‘Orang Johor’ had once lived in these kampungs. Some of them probably had ancestries traced back to the Orang Laut in Singapore’s early history. In 1948, the year in which Chinta was produced, these kampong dwellers from Johor had moved as a community to Punggol and Tanjong Irau (in Sembawang) after a curfew was imposed upon the declaration of the Malayan Emergency. Many of the villagers were nighttime fishermen and found it hard to continue their livelihood under curfew conditions, leading to their relocation across the Johor Strait. Some of them who owned lands returned to the Johor coast after the Emergency. The rest settled in Singapore. 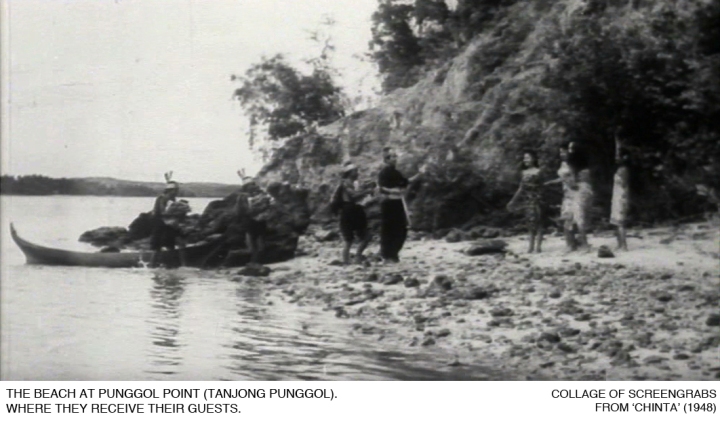 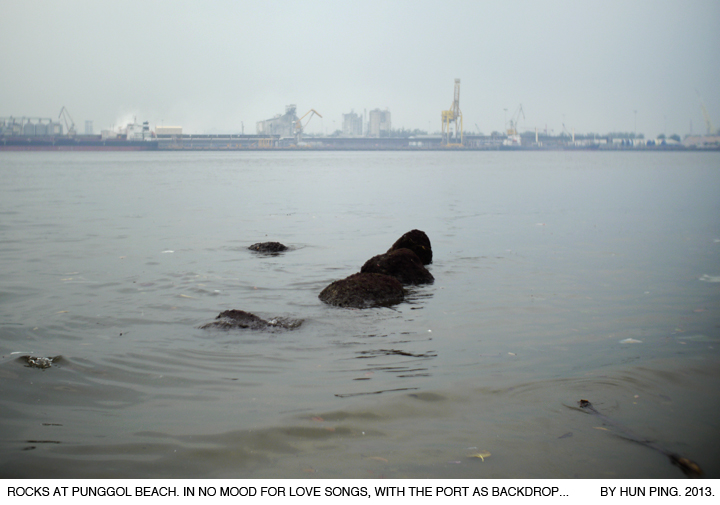 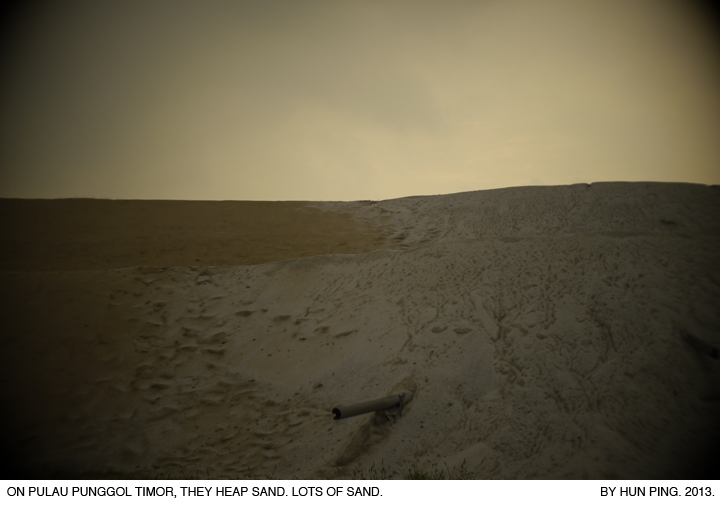 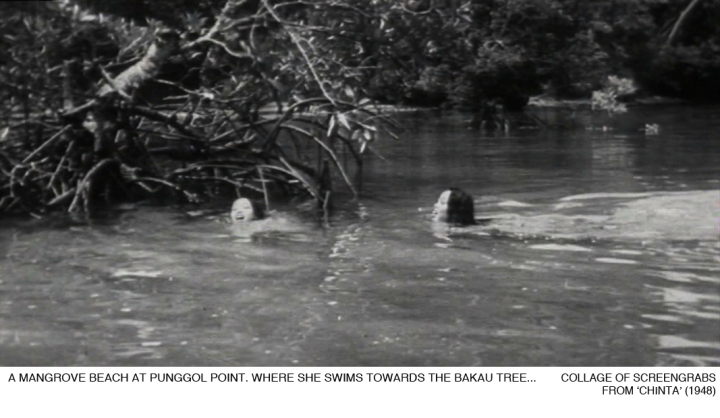 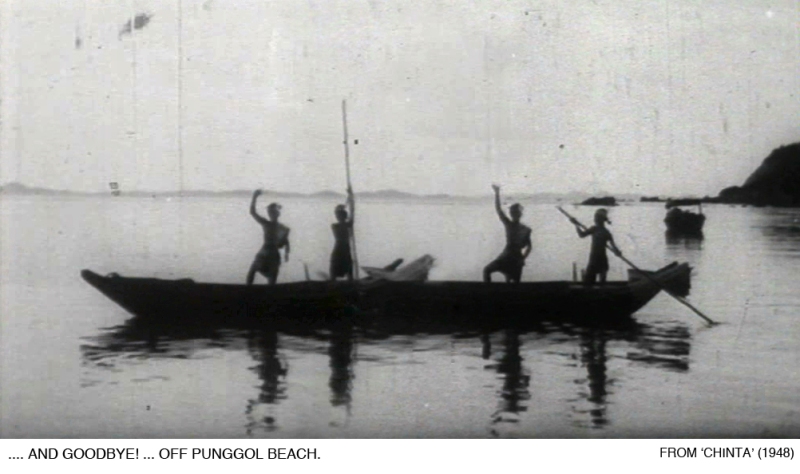 “Chinta is [one of] the oldest surviving feature film[s] from Singapore, and the fourth [post-World War Two] film by the [local Shaw Brothers studio] released right at the onset of the Malayan Emergency. Despite the turbulent political climate, Chinta is devoid of any overt reflections on reality, but exists through a converse relation, as fantasy and entertainment, a youthful daydream in which all contradictions and antagonisms are ironed out through an encapsulation of the archetypical love story, a universal theme within the Malay film industry during the golden era.

“The film begins with two strangers washed ashore from a shipwreck and being received by a coastal community. A village girl Chinta (played by a sultry Siput Sarawak) takes a liking to the younger Sanchi (S. Roomai Noor), who turns out to be masking his true identity as the king of the neighbouring Indrapura kingdom. In a twist of fate, Chinta’s foster-father reveals that she is the daughter of the Indrapura royal family who were ousted during a coup, and she is now of ripe age for revenge. However, as her name suggests, the love in the air is so infectious that it dissipates conflicts of past generations.

“Chinta is a prime early example of the hybridity of films from the golden era which synthesised Indian cinema’s musical tropes and Malay culture. It was released on 26 October 1948 at Rex Cinema, and proved to be a big hit with audiences who were enthralled by the star quality of Siput Sarawak and the first swimming scene ever featured in a Malay film. It also stars a lanky 19-year-old P. Ramlee in his first screen role as Putar, a jealous fisherman bent on thwarting the romance between Chinta and Sanchi.

“Zubir Said composed [at least] eight songs for the film which include ‘Pulau Nelayan’ [Fisherman’s Island, 3:25] and ‘Kumbang dan Rama-Rama’ [Beetles and Butterflies, 6:54, 22:38], songs about the way of life amidst the idyllic tropical settings which were sung by Nona Asiah; as well as ‘Gelora Asmara’ [36:53] and the theme song ‘Chinta’ [44:33], love duets sung by Nona Asiah and P. Ramlee, whose singing talent, more so that his still-awkward acting, resulted in him being officially hired as an employee of the [Shaw Brothers film studio].” 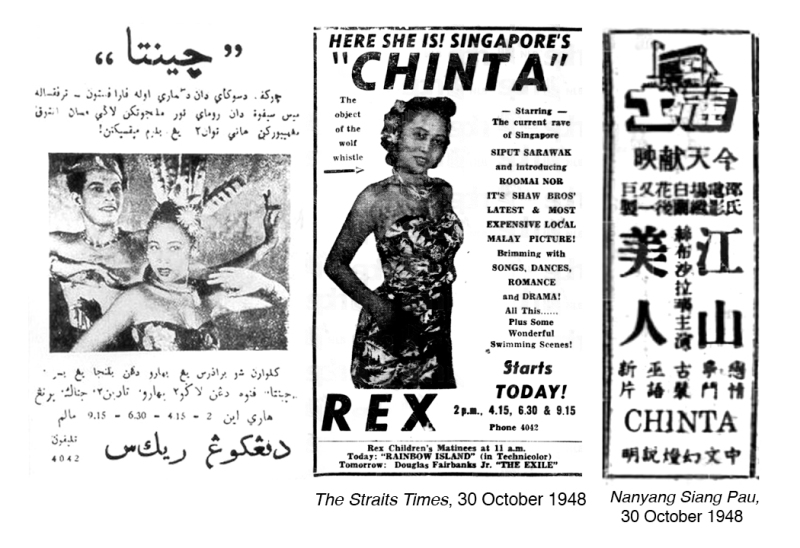