The ever-imaginative film director B.S. Rajhans transplants the fable of Aladdin and his magic lamp to Singapore’s Haw Par Villa (Tiger Balm Gardens), the famous Chinese mythological theme park by the Pasir Panjang coast in Singapore. As a result, the audience is treated to an eclectic display and mix of cultural expressions. The ubiquitous song and dance interludes in the film find actors and actresses dressed in Middle-Eastern style garb, belting out songs in Malay while synchronising their steps in a Chinese garden brimming with myriad sculptures and ornamentation.

‘Aladdin will not make money but…’, The Straits Times, 26 January 1952, page 4:
“Despite the popularity of the Malay film “Aladdin” which has been shown at the Capitol Cinema, Shaw Bros., the producers, do not expect that it will be a financial success. They feel, however that the hight cost of the production and the enormous amount of work that went into it (the film took over a year to make and has the largest cast ever assembled for a Malay film) has been justified by the prestige it won. Specially designed sets had to be made with limited resources and the specially composed music and dance sequences were rehearsed for weeks before the shooting. The director of “Aladdin” Mr. S. Rajhans, has more than 40 feature films to his credit, Indian and Burmese as well as Malay films. The associate producer was Mr. Shaw Vee Ngoh.”

Other ‘Aladdin’ films released in the year 1952:
Aladdin Aur Jadui Chirag (‘Aladdin and The Wonderful Lamp’) – https://youtu.be/K4DopjMxcDg
Aladdin and His Lamp – https://en.wikipedia.org/wiki/Aladdin_and_His_Lamp 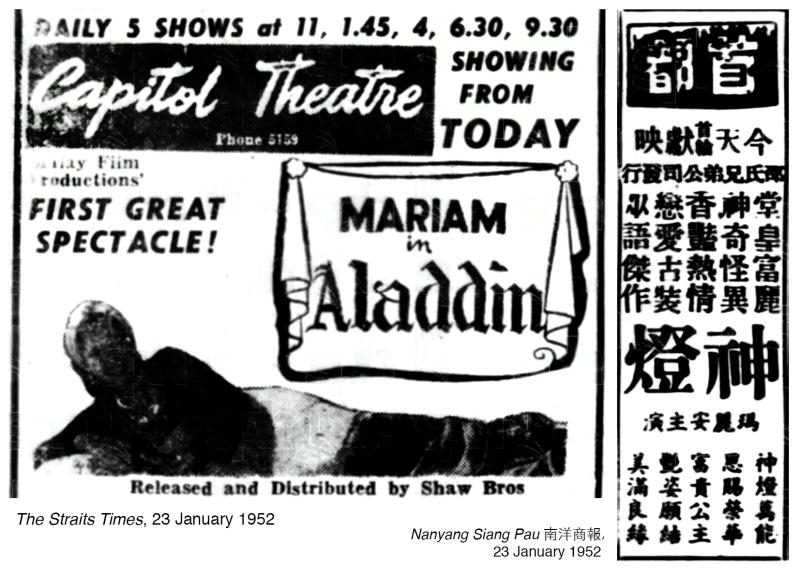