It remains a mystery to us who A. R. Iyer really was. Mr. Iyer, presumably a Tamil, was credited as the storywriter of Nilam and three later Malay Film Productions releases (Aloha [1950], Rachun Dunia [1950] and Sejoli [1951]). Was he a friend of B. S. Rajhans, Shaw Brothers’ prized director of their post-war Malay film productions? Or was he an acquaintance of the Shaw Brothers, who were constantly on the look out for talents who might contribute to their expanding film business? A search in the local newspapers archives didn’t reveal much, other than a report about a similarly named patriot who gave an “address on India’s war efforts” (Singapore Free Press, 18 Oct 1941, p. 5). He did have a knack for conjuring up exotic-tinged fables set in far-flung places; Aloha flew the movie audiences out to Hawaii, and Nilam set them sailing from Java to an Egypt where everyone looks and speaks Malay. And more incredibly, the making of these local film productions never deserted Singapore for the more excitable (and heavier on the budget) foreign lands in the Pacific or the Middle East. Singapore, on film, could be contrived to appear just as alluringly strange or romantic.

In Nilam, Ahmad (S. Roomai Noor) is urged by his mother to leave his village in pursuit of greater adventures overseas. He inherits a magic holy ‘keris’ and takes to the oceans with his newfound friend Jaiman (Daeng Harris) at the ship anchorage. They sail from Java halfway round the globe and land in an Arabian kingdom in Egypt. There, Ahmad falls in love with princess Nilam (Siput Sarawak), magically cures her of a sleep-dancing spell, and is about to marry her with the king’s consent. But the scheming prime minister, in favour of his own son’s marriage to princess Nilam, advises that Ahmad should bring back a mythical sapphire to the palace as a betrothal gift, from a cave in a faraway place guarded by vicious Egyptian mummies.

The film story mainly happens in the interiors of Arabian royal palaces and Egyptian dance clubs, which would have called for shooting in studio sets. But Nilam’s narrative did offer a handful of opportunities to shoot outdoors on location, with a meandering storyline that runs, or sails, from a Javanese seaport where Ahmad makes his departure; over a lake in the garden where Ahmad confesses his love for Nilam; through rugged rocky landscapes where Ahmad and Jaiman seek the sapphire; and down granite quarries where Ahmad becomes a blind slave, late in the film. The film crew matched the fictional Javanese seaport with the Tongkang anchorage at Kallang Basin, then situated off Beach Road and Crawford Street (as we reasonably speculate), close to the mouths of Rochor and Kallang Rivers. They picked the Alkaff Gardens and Lake, located off Serangoon Road (we are more certain with this one), to masquerade as the Egyptian garden of love in the film. And they probably combed the island to pair Singapore’s outlying rugged landscapes (rocky outcrops, granite quarries) with the desert landscapes of the imaginary Middle East (just as we did to search for similar-looking rocky places in today’s predominantly urban Singapore.)

‘Tongkang’ (a word probably derived from ‘belongkang’, a Sumatran term for a river cargo boat) is a cargo-carrying sea vessel that is propelled by sail, chiefly used to transport charcoal, firewood and piling logs as part of the inter-coastal and inter-island trade in the region (Indonesia, Malaya, Thailand). Before Mainland China came under communist rule in 1949, tongkangs (or junks), mostly setting sail from Hainan, had already been used to ship cargo between China and Singapore since the 19th century. Away from the major harbours at Keppel and Tanjong Pagar which catered to steamships, the tongkangs were assigned to anchor and congregate at the secondary port town at Kallang Basin (which we wrote about earlier in our review of Singapore [1947].) There, a tongkang and ship repair-and-building industry also grew in tandem with the increase in usage of the tongkang anchorage at the port town. Tanjong Rhu later replaced Beach Road as the venue of the anchorage, where new warehouses and wharves were built to accommodate the tongkang trade. 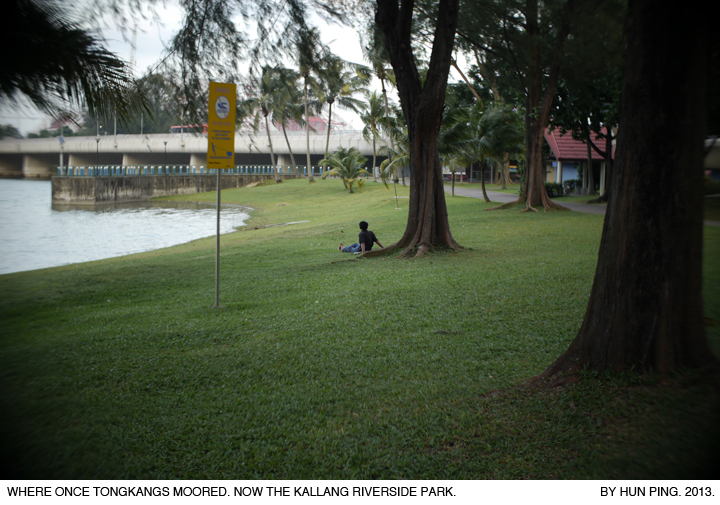 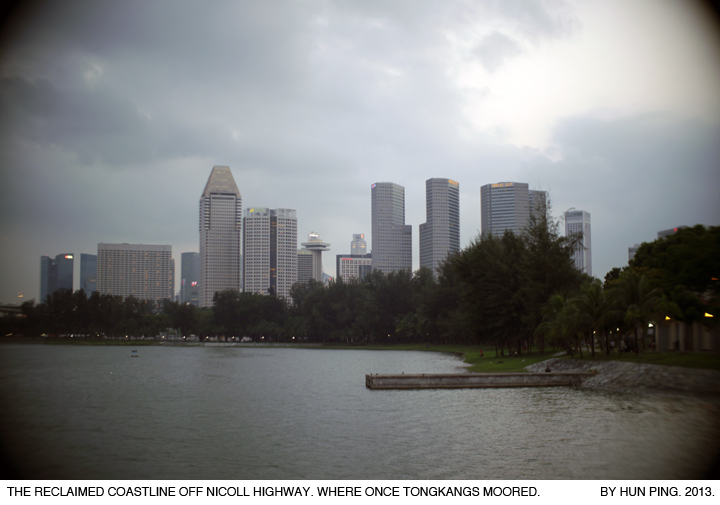 Of the various estates and properties owned by the well-to-do along Upper Serangoon Road, Alkaff Gardens, which belonged to the notable Alkaff family of traders and landowners was one the most well-known landmarks and destinations for weekend revelers. (The family also owned the Alkaff Mansion at Telok Blangah Hill). Designed by the Japanese, the landscaped gardens and lake, with fake hills, and facilities for leisure boat rowing, opened to the public in 1929. Its popularity went into decline in the 1940s. Japanese shelling during the war destroyed the bridges over the lake. The garden site was eventually sold to a property developer in 1949. The lake was drained in the mid-1960s and the gardens made way for a school (Willow Avenue Secondary School). The Cedar Girls’ Secondary School took over the campus in the 1990s and has been there since. In the interim during the 1950s when the garden was half-abandoned, the Shaw Brothers’ Malay Film Productions, with its studio in nearby Balestier, brought life and romance to it whenever a film script called for a lovers’ serenade in an Eden-like garden (this is common to Pembalasan [1951], Rayuan Sukma [1951] and Patah Hati [1952] too.) 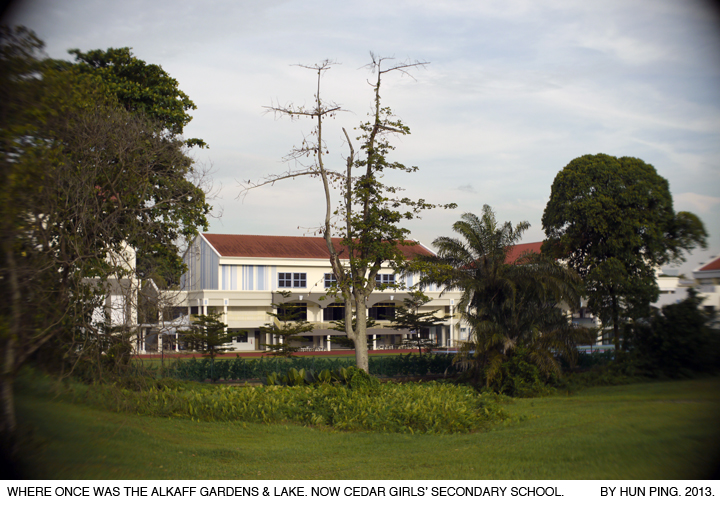 As we watched the above sequences from Nilam, we wonder where in 1940s Singapore could a film crew tap onto for filming locations to depict the harshest of landscapes, as settings for a gruelling treasure-hunting adventure, or a slave-driving labour camp? Rocky outcrops? Barren hills? Granite quarries? By referring to maps and geological studies made in Singapore, we discovered that hard igneous rock (granite) made up the ground and foundation of the central third of the Singapore island, with other pockets of similar geological stuff found in Changi and offshore Pulau Ubin. Not surprisingly, therein were the areas where granite quarrying began to take place in Singapore – Pulau Ubin, Bukit Timah, Mandai (in that order chronologically, up to early 1950s), and subsequently Bukit Gombak and Bukit Panjang (developed in the late 1950s to 1960s, amidst a construction boom). We tracked down a few of the possible granite quarries in Singapore (most are quarry lakes now) where the film crew of 1949’s Nilam might have used for location shoots. Where sapphires and mummies were hidden, and slaves whipped into submission… 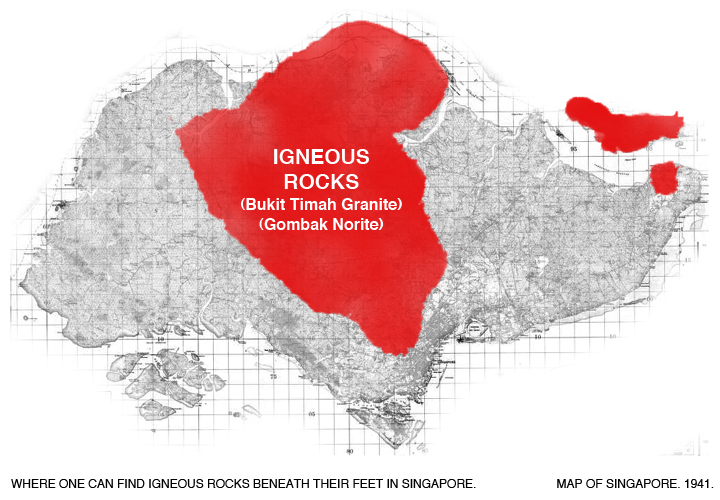 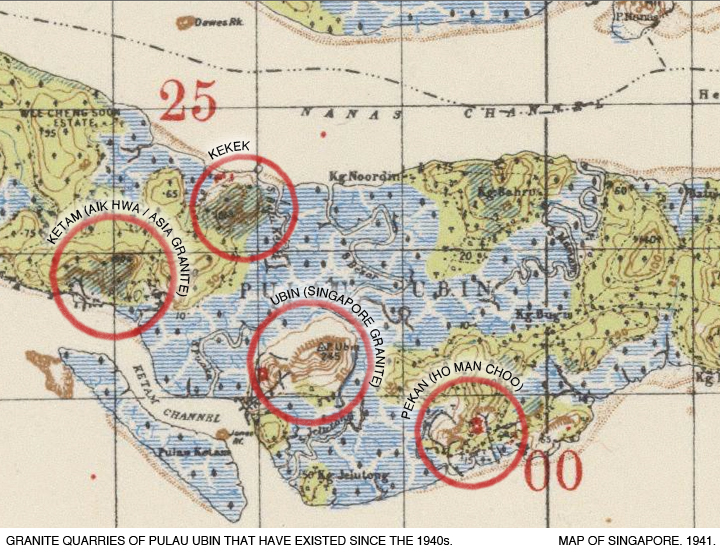 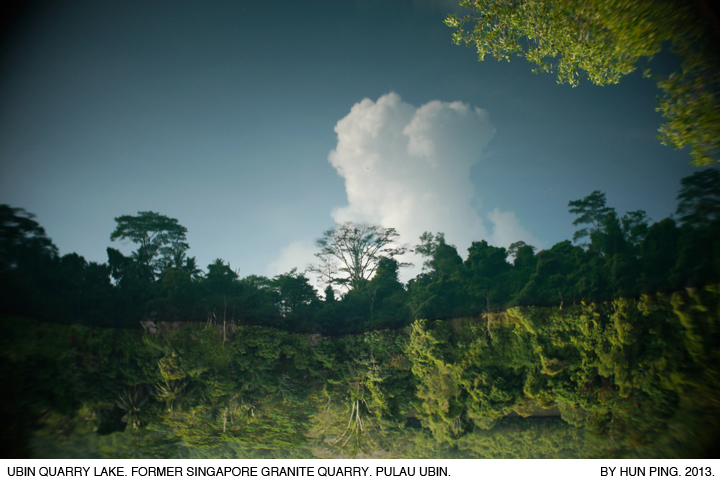 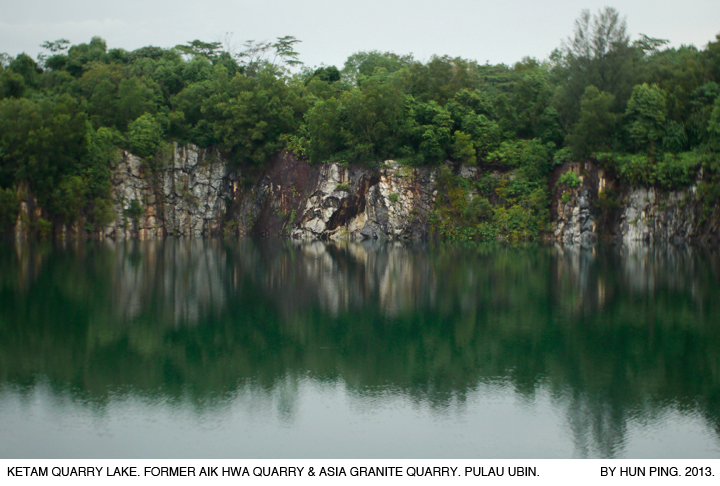 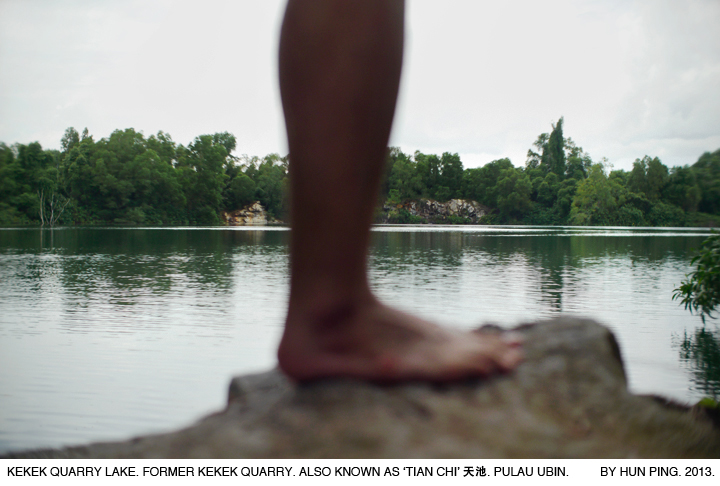 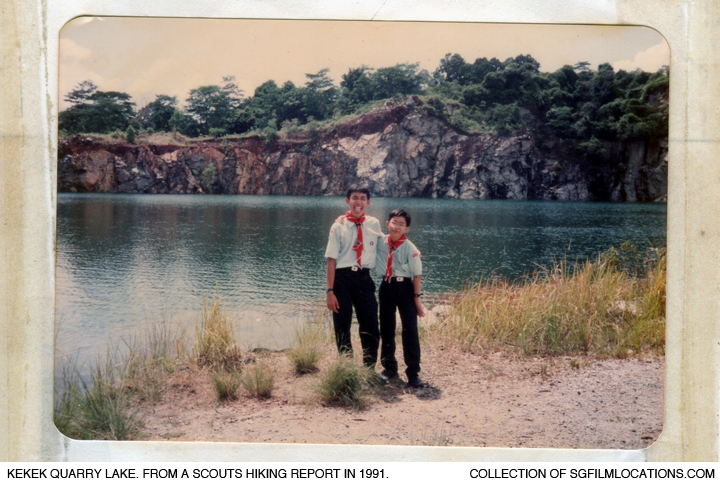 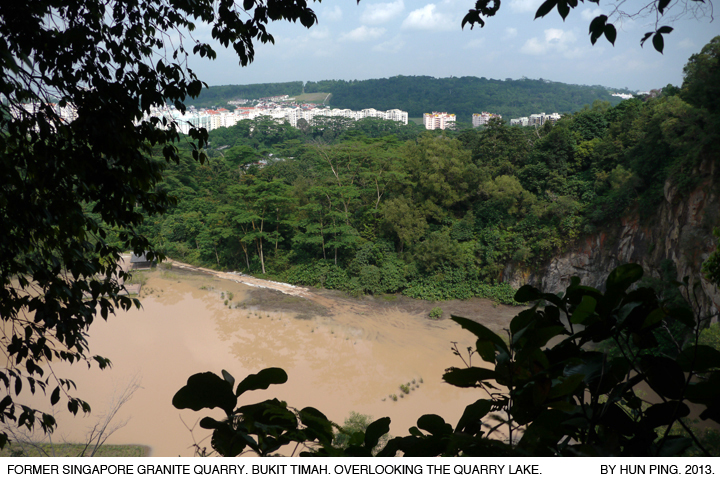 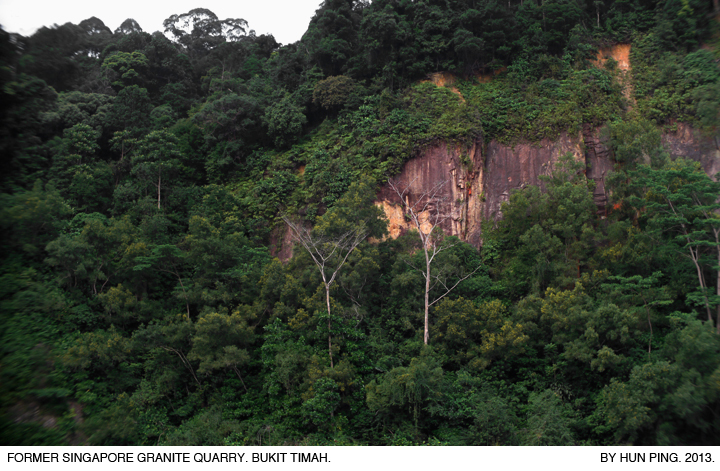 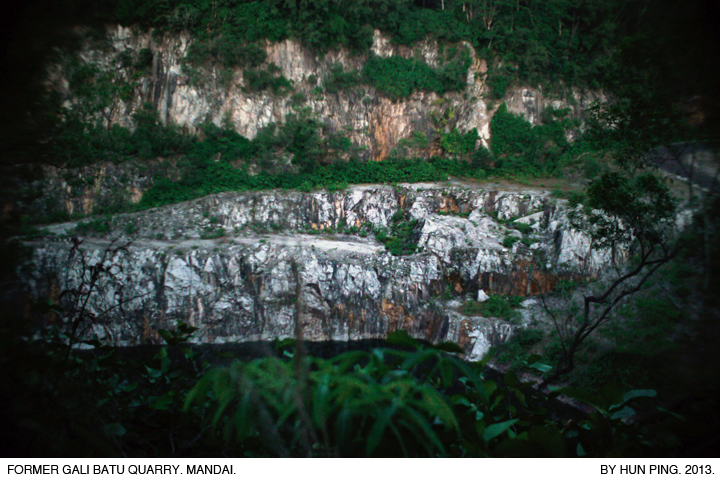 “Once again the crowd-pleasing partnership of Siput Sarawak and Roomai Noor graced an exotic story which mingled elements of the ‘Arabian Nights’ with those of fairy-tales. The richly complicated plot, set in Java, involved a magic keris, an evil genius, a flying horse, a priceless jewel guarded by haunted mummies, a belt that made the wearer invisible, a blind man who regains his sight, and the customary finale of a happy marriage between two lovers after many adventures. To make confusion worse confounded, Siput Sarawak played two roles: that of Nilam, daughter to the King of Egypt, and that of the beautiful dancer Dilara. Much trick photography, supported by Osman Ahmad’s insinuating melodies sung by P. Ramlee, enhanced a mixture that was typical of Malay Film Productions films at the time.”