IN HIS PROLIFIC CAREER as a cameraperson and travel filmmaker, André de la Varre a.k.a ‘The Screen Traveler’, created a copious amount of short subject documentaries, including work done for Burton Holmes (a renown travel film lecturer who first coined the term ‘travelogue’ back in 1904.) Among them, his independently produced travelogue of Singapore in 1938 was an 11-minute piece that worked well as a simple introduction to the British colony. It was perhaps most useful as an information guide for potential travelers and tourists. For us denizens in 21st century Singapore, watching this filmlet made us ‘tourists’ to the past, or as some might say, to “a foreign country”. But there is to be no sense of feeling alien as most of what was captured in the film is surprisingly familiar. We face no difficulty recognizing the Singapore River and its bridges and quays, the waterfront and its monuments, iconic colonial buildings and famous places of worship – many of which have been conserved to the present day (to become major tourists attractions…) It took us a little more effort to recognize a scene of China Street and Club Street, looking towards Ann Siang Hill with Yeung Ching School 养正学校 (翠兰岗) at the hilltop. The school has since been demolished and the surrounding area mostly gentrified. We also had to pour through some history books, for example, the late Lee Kip Lin’s The Singapore House: 1819-1942, so as to identify the former Heeren Building along Orchard Road. Yet, there are several other shophouse streets and colonial bungalows that we still aren’t able to identify. (Perhaps readers can assist us with that.) 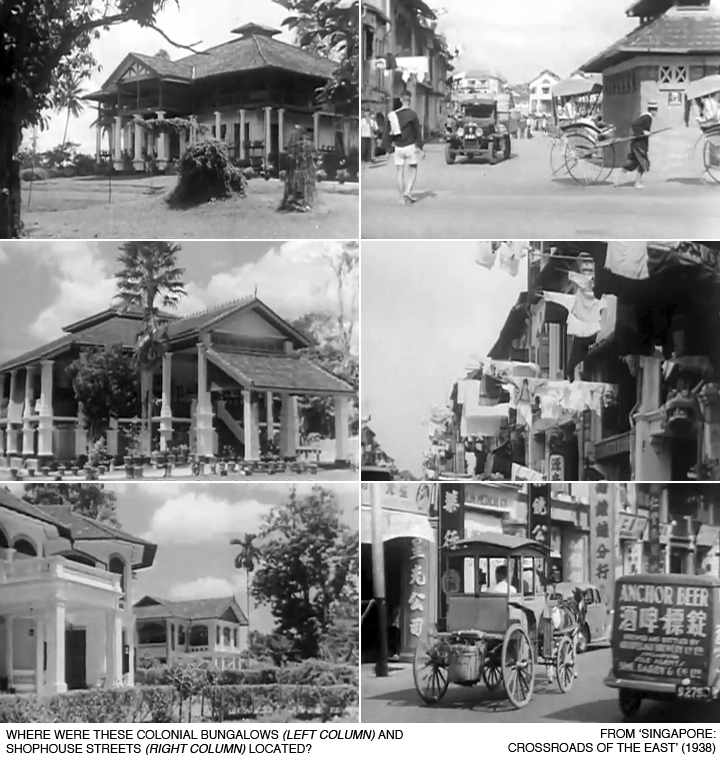 Two hilltop panoramic views at the beginning of the film are likewise particularly striking for us. The first was shot from Mount Faber, looking east towards the harbour (Empire Dock) and railway station at Tanjong Pagar.

The second pan, this one of downtown Singapore, was from atop Fort Canning Hill, filmed from the southeast edge of the Fort Canning Service Reservoir, with the Fort Canning Lighthouse included in the shot. This is a view of downtown Singapore in the late 1930s, sans the modern ‘glass and steel’ skyscrapers of today. The Old Supreme Court Building was not even completed then. What is of most intrigue to us in the pan shot is the (covered) service reservoir, which is still in use today, under the control of the Public Utilities Board (PUB), but closed to public access. From newspaper archives, we discovered that its construction took place between March 1927 and January 1929 – built over what used to be the old military fort. It was a major engineering feat of the time and was designed to increase the reserve of water provisions for the town, in conjunction with a new supply of piped water from Johor’s Gunung Pulai (via the older, smaller Pearl’s Hill service reservoir); at its maximum capacity, it could store 30 million gallons of water. Upon its completion, there were many suggestions to convert the turfed roof of the reservoir into a sports field or public open space, but we were unsure if that was ever realized. Perhaps that might be an idea for the authorities to consider today?

Singapore: Crossroads of the East is available for viewing on Youtube.