THE FILM’S TITLE Trade Winds should give us a clue about what it was about. We might have expected a movie about traders in sailing ships crossing the world’s oceans, in hope that the prevailing winds would steer them to their desired destinations. But no, the title was quite a misnomer. This was the 1930s and merchant shipping or sea travel had long switched from sail to steam. And the film was no historical epic either, instead a contemporary tale about a witty, skirt-chasing private detective on the heels of a beautiful fugitive on the escape round the world.

A globetrotter himself, Hollywood film director Tay Garnett had in mind two film titles to be produced while he was on a yacht cruise around the planet in 1936, shooting footage of ‘exotic’ locations for the films as he went along. One was named Singapore Bound, which wasn’t made eventually. The other one was Trade Winds, which took in scenes from Japan, Shanghai, Colombo, Bombay and Singapore – stopovers in the fictional murder suspect’s flight from arrest. However, the acting for this mix of crime drama, romance and comedy never left the film studios, as much of it was played against rear projections, in what are technically known as ‘process shots’. So we get to see Joan Bennett and Fredric March (in their roles as Kay Kerrigan and Sam Wye, the fugitive-detective pair turned lovers) getting all excited as they watch a film projection of the Singapore Turf Club’s racing track, with the horses their characters took bets on in ‘screen’ action.

When Tay Garnett and his entourage visited Singapore in 1936, the Turf Club in Bukit Timah was still a novelty, newly opened three years before to claims of being the finest in the world. This might explain why Tay Garnett dedicated the majority of the film’s layover in Singapore to it. As the film reveals, there is a teeming bazaar in front of the entrance to the grandstand, with satay peddlers and snake charmers. On the opposite side of the stands, an Indian military band is playing before the start of the races. A thronging crowd of gamblers is packing the betting lounge in the open verandahs. From the three-tiered grandstand, spectators watch the horses on the oblong racing course, carved out of a hilly landscape that was once a rubber plantation. There is also coverage of a ‘last race’ that Kay Kerrigan bets all her prior winnings on, from the anticipation at the starting line, to the tense moments of the competition and the eventual setback or elation at the end of the race.

The Singapore Turf Club relocated from Bukit Timah to Kranji in 1999. Later, the grandstands – a second one was added in 1981 – were converted into a shopping mall, formerly named Turf City, now The Grandstand. The racing track was tarred over, and the grass fields turned into commercial sporting venues. 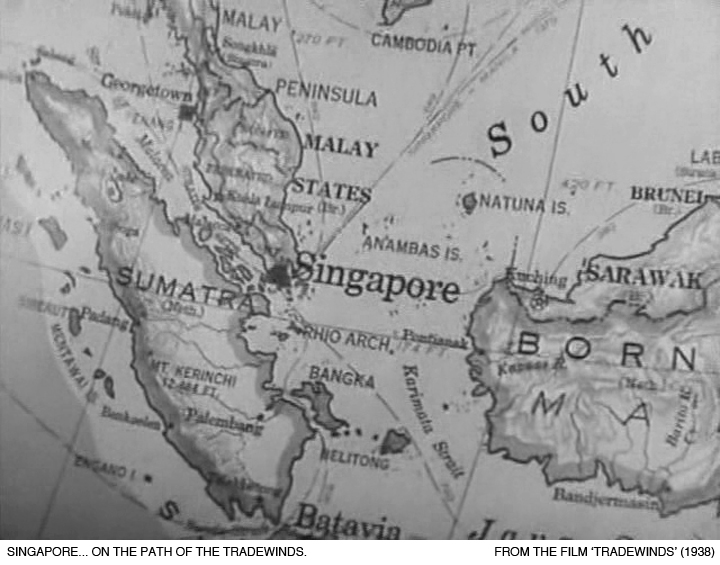 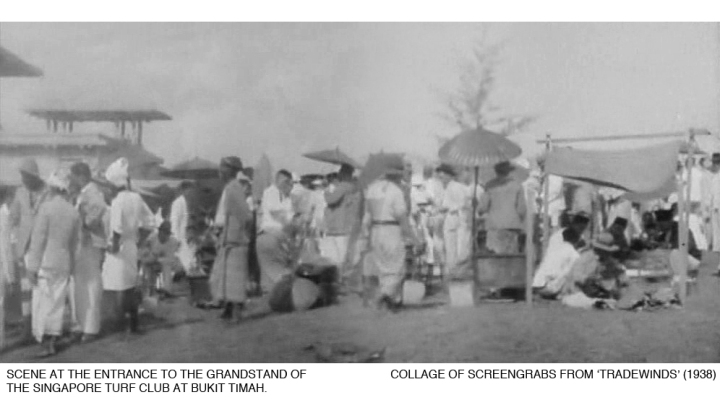 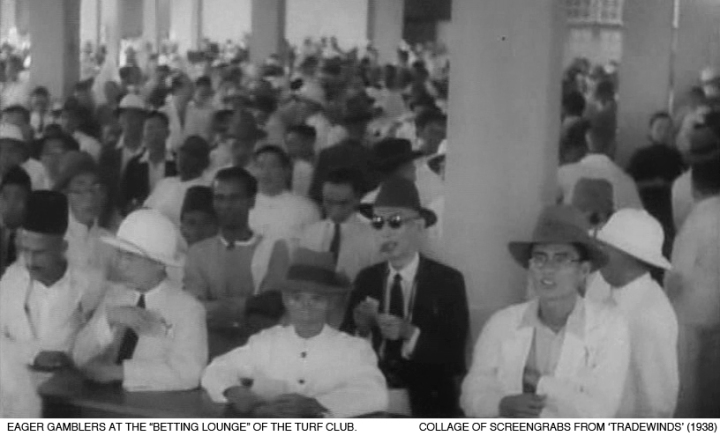 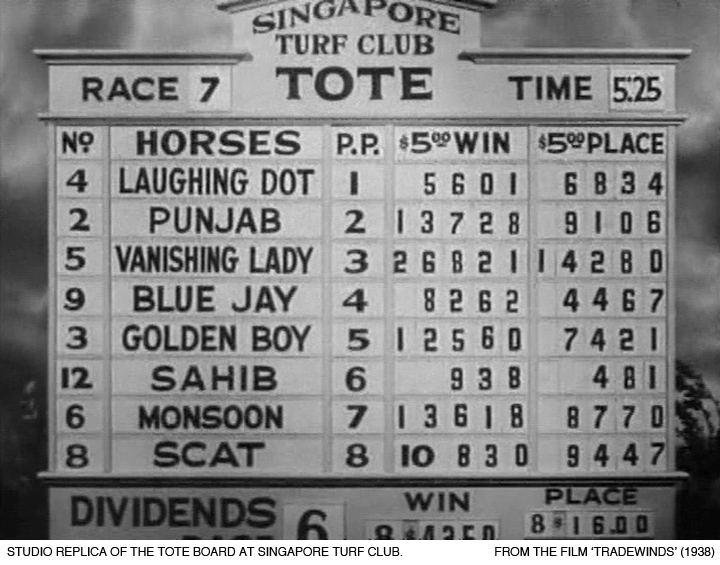 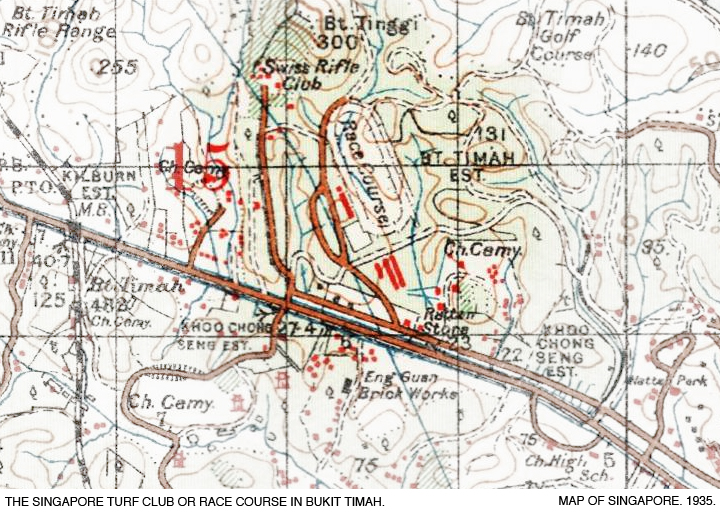 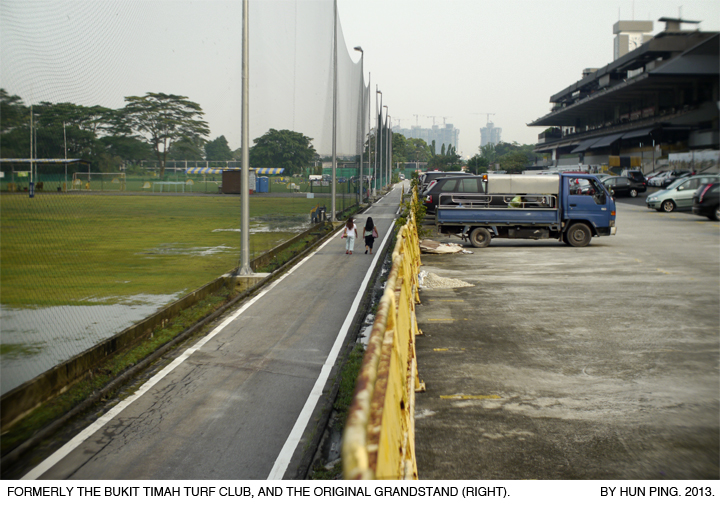 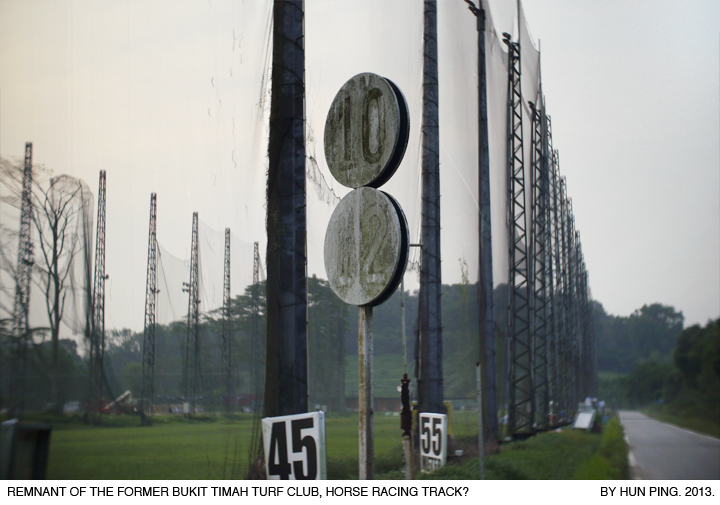 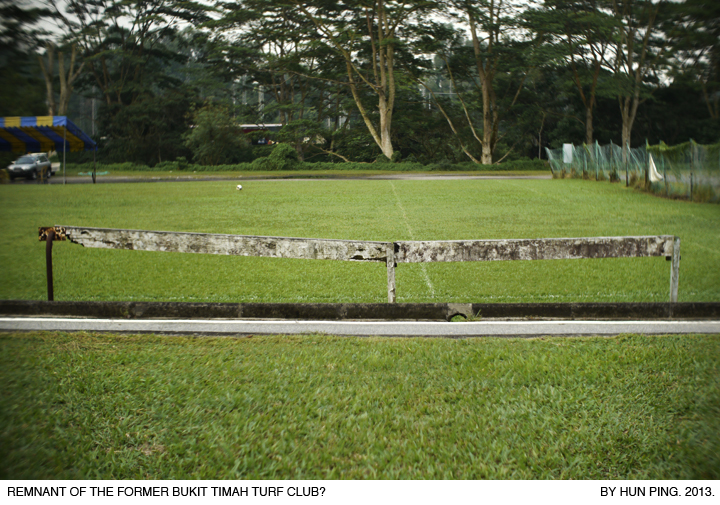 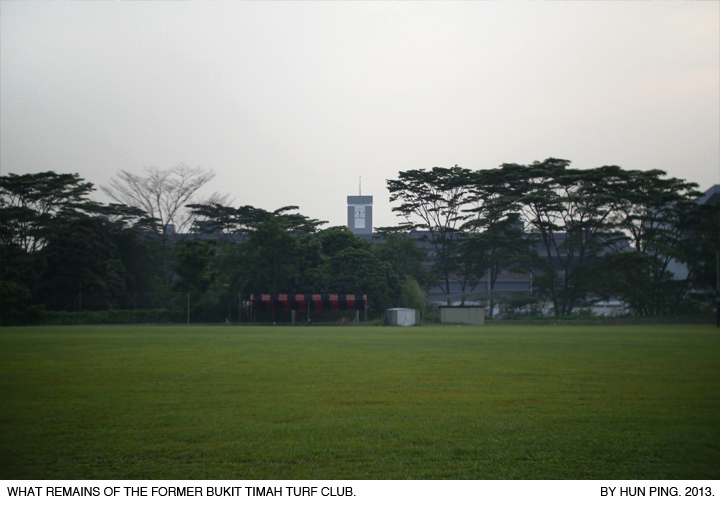