Original film titles in English:
His Chinese Friend
The Poisoned Darts
A Chinese Funeral
A Day at Singapore

“EDMUND MITCHELL [a seasoned travel writer] leaned back in his chair and pondered the proposal as he lit a cigar. He had just finished dinner with his friend, filmmaker Gaston Méliès, when he suddenly pitched a most peculiar idea to travel the tribal regions of the South Pacific with a moving picture camera. The proposition was quite radical: no film crew had ever shot footage in many of the places listed in the itinerary. “Tahiti, New Zealand, New South Wales, Queensland, Java, Singapore, Indo-China, Hong-Kong, China and Japan,” Méliès said. “Then back to Los Angeles.” The 67-year-old Frenchman, who ran Méliès Star Film Company with his legendary brother Georges, asked Mitchell to join his handpicked crew for the 25,000-mile expedition overseas.

“A week later, on July 24, Méliès’ crew – which included notable actors of the time such as Henry Stanley and Fanny Midgley – boarded the massive 4,500-ton steam ship Manuka from a San Francisco dock and embarked into what were uncharted seas for a movie camera. The 16-person troupe wasted no time and began clearing the ship’s deck to build sets as soon as land had disappeared from the horizon.”

– extracts from theforgottenvictorian.com [This brilliant website about Edmund Mitchell was defunct when we last checked on 20 July 2015. It offered a rather substantial account of the Gaston Méliès film crew’s voyage across the South Pacific, from Tahiti to New Zealand. The website’s author Joe Kemp, also wrote that, subsequently, “for several weeks, more films were made in cities along the Australian coast, Java and Malaysia. The group faced the bad weather of monsoon season and robberies at a Singapore hotel and an Angkor bungalow… news of their films’ failure to capture an audience in the United States came as they were spending their last month in China and Japan… On Wednesday, March 24, 1913, Méliès’ crew was forced to board the S.S. Tambu Maru in Yokohama and began their 5,800-mile trip home to California.”] 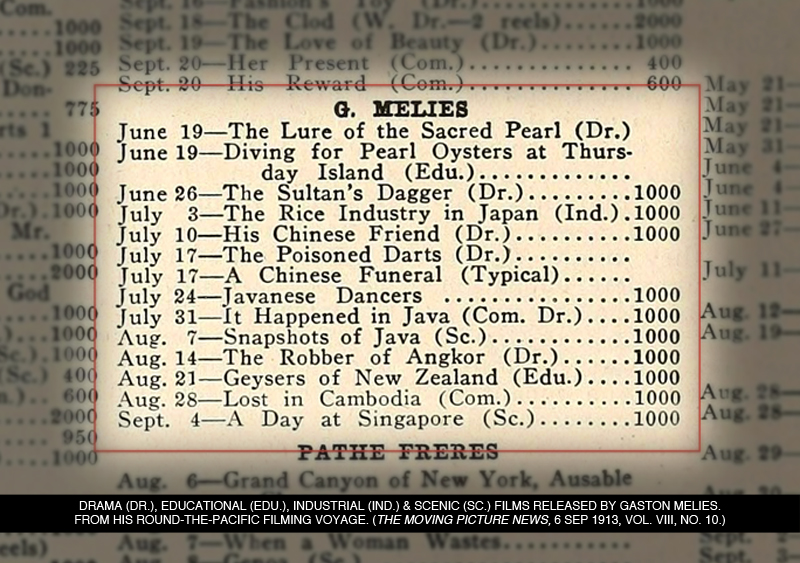 From records in American film magazines of the era (Moving Picture World especially), we now know that Melies and Mitchell made at least four short films in Singapore, as part their “round the world” film voyage. They directed two drama films, the first-ever fiction films made in Singapore(!) – His Chinese Friend and The Poisoned Darts – which were advertised as having been shot in Singapore and “Passir Riz” (this most likely refers to ‘Pasir Ris’). The Poisoned Darts was also released as a split reel together with a short documentary A Chinese Funeral; described as “odd, grotesque”, it was an “actual burial of a wealthy Chinese woman at Singapore”. Last but not least, there was the scenic documentary A Day at Singapore, which was likely shot in and around the Singapore town, including the Singapore River, whose image was eventually adopted for the film’s poster design (see above). 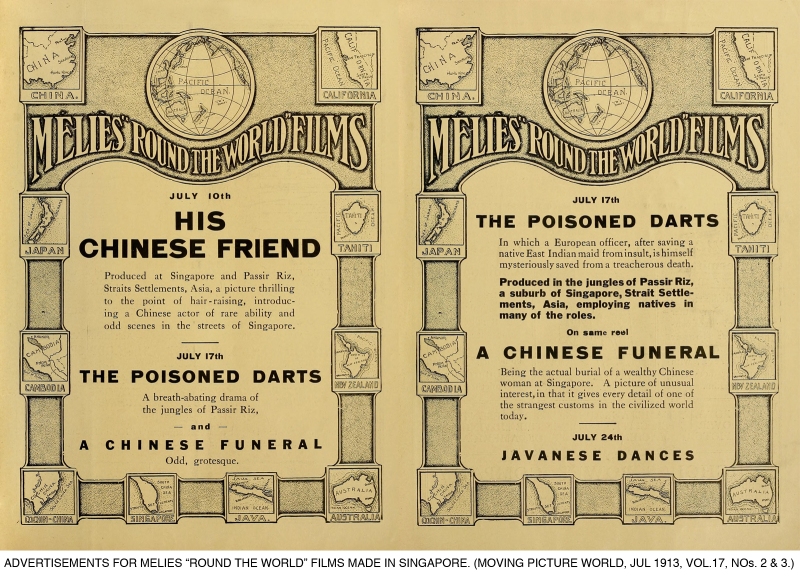 “HIS CHINESE FRIEND (Produced at Singapore, Straits Settlement, Asia – July 10) – Playing on the streets of Singapore with his little Chinese friend, Wing, Charlie Foster, an American lad of three years, is suddenly kidnapped. It does not take the earlier-matured mind of Wing long to grasp the whole situation, and by promptly telling the police, he saves his playmate.

Twenty-five years later finds the two companions still. Foster, now married, is a speculator. He plunges in rubber. There comes a slump in this stock and financial ruin stares him in the face. Once more the Chinaman, with his savings and by raising money on his personal credit, comes to the rescue of his friend, tiding him over until another boom in rubber makes Foster wealthy.

Ten years more pass and Wing is a high offical, but secretly a leader in the Chinese revolution. The ministry becomes aware of his double dealing and issues a proclamation offering a reward for his arrest. Foster learns of the proclamation and quickly hurries in his automobile to Wing’s palatial home, and spirits him away to his office. But they are followed and the Chinaman is fired at. He drops apparently lifeless.

News spreads that Wing is dead and a great funeral is held. But Wing was very much alive and dropped, not from a bullet wound, but as a precautionary measure to save his skin. Foster nails him in a box marked for shipment to Europe, from which, when it is hoised on the steamer, he comes out. The two friends part, swearing everlasting devotion, though seas may part them.”

“THE POISONED DARTS (July 17) – (Produced at Passir Riz, near Singapore, Straits Settlements, Asia) – A shipwrecked crew, consisting of an officer and several men, find themselves on an island in the East Indies. After consuming the scant stores saved from the ship, they resolve to venture inland, following a path through the tropical forest. Already a mutinous spirit against the officer has developed, and this culminates when, one of the crew having surprised and seized a native girl, the officer releases the girl and sends her on her way. In anger the men next morning lay hold of the officer and bind him to a tree. On the principle that dead men tell no tales it is resolved to kill him, and lots are drawn to determine who shall commit the deed. One man is chosen, and is in the act of raising the officer’s pistol to shoot him when a poisoned dart from the jungle ends the man’s life. The officer’s bonds are at the same time severed by a knife, a dusky figure showing dimly through the bushes behind the tree and unseen by the captive.

Wondering at his release, but thankful to be free, the officer follows his men and, amid the general dread inspired by the poisoned dart, once more takes command. The survivors struggle on through the forest, but one by one, as they menance or ill use the officer, the men fall victims to poisoned darts mysteriously shot from the jungle. At last the officer is alone, and, utterly wearied, he falls asleep under a tree. On awakening he finds fruits, cakes and water by his side. Then he realizes that, because he saved the girl, the unseen natives are saving and succoring him. Eventually they appear, invite him to their village, and nurse him through a fever. News is brought of a ship in sight, and the castaway is carried to the beach by his faithful native friends, and rescued by the passing vessel.”

“A CHINESE FUNERAL (July 17) – One of the oddest sights that can be beheld by the traveler in the far East. The procession is led by a gong band creating terrific noises to scare away the evil spirits. Giant grotesque figures are employed for the same purpose. All the friends of the deceased parade to the grave where, while the casket is being lowered and covered with cement, they partake of a meal furnished by the deceased’s relatives. It is the Chinese custom to feast and be happy as a fitting culmination to the long days of prayer and vigil. The rites and ceremonies of a Chinese funeral are the most interesting of any burial.

“A DAY AT SINGAPORE – Melies. An interesting scenic of the picturesque show places of Singapore, Straits Settlement, Asia. Singapore, which is at the extreme southern end of the Malayan peninsula, is one of the largest seaports in the world. Its inhabitants are for the most part Malays, with a large proportion of we see all classes in their respective quarters.”